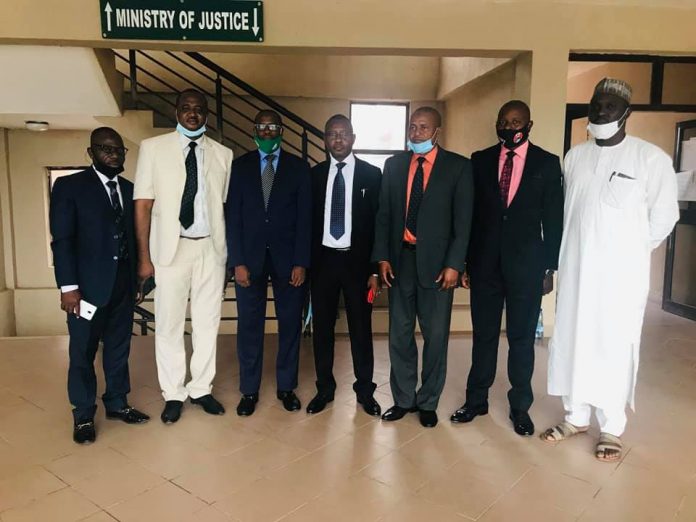 Jigawa State’s Attorney -General and Commissioner of Justice, Musa Adamu Aliyu, has solicited the assistance of the Economic and Financial Crimes Commission, EFCC, in establishing an anti- corruption commission for the state.

Aliyu made this request on Tuesday, September 15, 2020, when the Kano zonal head of the EFCC, Sanusi Aliyu Mohammed, paid him a Courtesy Visit in his office.

According to him, the Jigawa state’s judiciary and the state government were very passionate about fighting corruption .

“This country will not move forward if we don’t fight the menace of corruption which has been destroying the country.

“That’s why after my appointment as the Attorney- General, his Excellency, the governor of Jigawa State and I, have made commitments to establish a Public Complaint and Anti- Corruption Commission in Jigawa State,” he said.

Aliyu added that once they concluded preparation for the establishment of PCACC, the state government would approach the Commission for guidance.

Mohammed, in his opening remark, stated that the judiciary remained the cardinal partner of EFCC in the administration of criminal justice.

He also mentioned that in the operations of the Commission, “the judiciary is always the final point of any investigation.”

He, therefore, appealed for the support of the Attorney-General and his entire ministry for a speedy dispensation of EFCC cases in the state’s courts.

Also, the zonal head urged the AG to intervene on behalf of the Commission against lawyers using frivolous exparte motions to restrain the EFCC from investigating their clients.

In his response, Aliyu assured the Commission that the Jigawa state’s judiciary was in the process of digitalizing the entire judicial processes and automating them accordingly.

He also took the opportunity of the occasion to inform Mohammed that the pioneer Chairman of the EFCC, Malam Nuhu Ribadu, had been invited to Jigawa to participate in a training programme organized to train judicial officers on how to discharge their duties with confidence.

In respect of frivolous exparte applications by lawyers, Aliyu lamented his lack of power to dictate to judges on how they should operate in their courts.