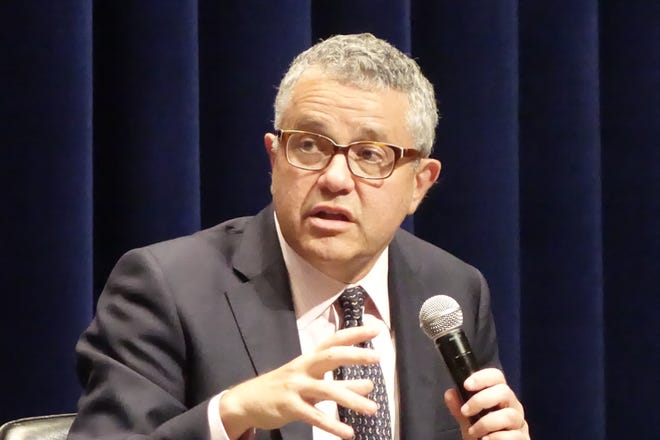 Jeffrey Toobin is trending again and this time it’s worse news: He’s been fired. The longtime staff writer for The New Yorker announced by tweet Wednesday that the venerable magazine had fired him after 27 years.

The news came 24 days after the magazine confirmed he was suspended, reportedly for exposing his genitals on a Zoom call with magazine colleagues and a radio station.

Since then, it’s been Twitter silence from Toobin, who tweeted only once, on Oct. 27, to “join in the grieving” over the death of Daniel Menaker, a friend and former editor.

Then suddenly, on Wednesday evening, Toobin popped up again.

“I was fired today by @NewYorker after 27 years as a Staff Writer. I will always love the magazine, will miss my colleagues, and will look forward to reading their work,” his tweet said.

The magazine has been investigating the episode since Oct. 15. Toobin said it resulted because he was unaware he had forgotten to turn off the video and audio on his computer during a break in the virtual meeting with his colleagues.

What they saw – Toobin’s genitals exposed – soon leaked out.

A spokesperson for The New Yorker confirmed to USA TODAY Wednesday that as a result of the investigation, Toobin is no longer affiliated with the company.

“I want to assure everyone that we take workplace matters seriously. We are committed to fostering an environment where everyone feels respected and upholds our standards of conduct,” said Stan Duncan, chief people officer for Condé Nast, the magazine’s parent company, in a memo distributed to the staff.

USA TODAY reached out to CNN, where Toobin has worked for years as chief legal analyst for the cable news network.

Last month, Toobin abjectly apologized in a statement to Vice, which was first to report the story of his humiliation.

“I made an embarrassingly stupid mistake, believing I was off-camera. I apologize to my wife, family, friends and co-workers,” the statement said. “I believed I was not visible on Zoom. I thought no one on the Zoom call could see me. I thought I had muted the Zoom video.”

CNN told USA TODAY at the time that Toobin had asked for some time off while he dealt with a personal issue, which was granted.

Toobin, 60, has been a familiar face on TV for years, commenting on legal issues and reporting for The New Yorker.

He’s also written numerous books, and promotes his most recent, “True Crimes and Misdemeanors: The Investigation of Donald Trump,” on his Twitter profile.

Since the coronavirus pandemic forced millions to work from home via video phone conversations, accidental nudity has been a growing problem as users struggle to cope with an unfamiliar and sometimes balky technology.

You’ll be shot before you use your arms, Police IG warns...