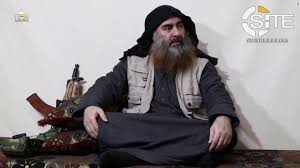 ISIS has confirmed the death of its leader Abu Bakr al-Baghdadi after the self-appointed ‘caliph’ died during a U.S. special forces raid in Syria last weekend.

In an audio statement today the terror group announced Abu Ibrahim al-Hashimi al-Qurayshi as its new leader – an unknown name which could be a pseudonym.

Vowing revenge, the jihadists labelled Donald Trump a ‘crazy old man’ and told America not to ‘rejoice’ at Baghdadi’s death.

‘America, don’t you realize that the Islamic State is now at the forefront of Europe and West Africa? It is extended from the East to the West,’ the statement said.

”Do not rejoice America, the new chosen one will make you forget the horror you have beholden… and make the achievements of the Baghdadi days taste sweet’.

ISIS fanatics were urged to swear allegiance to the new ‘caliph’, who does not have any remaining territory to rule over.

They were also told to heed Baghdadi’s words in his final recorded message in September, when he urged his followers to break imprisoned ISIS members out of prison.

More than 10,000 ISIS prisoners are being held in Syria while another camp is home to some 70,000 people, mainly relatives of the extremists.

‘The Islamic State shura council convened immediately after confirming the martyrdom of Sheikh Abu Bakr al-Baghdadi, and the elders of the holy warriors agreed’ on a replacement,’ the message said.

‘We should expect to see a campaign for this message spanning various platforms, accompanied by pledges from across the world,’ she said today.

‘For ISIS supporters, the deaths of Baghdadi and Abu Hassan al-Muhajir were never going to change anything. As I write this, new pledges of allegiance are already being posted across ISIS web venues.’

The new leader was identified as a scholar, a well-known warrior and ’emir of war’ who has battled American forces and knows ‘its wars.’

His use of the name al-Qurayshi is seemingly intended to establish a link between himself and the tribe to which the Prophet Muhammad belonged.

Experts have said that belonging to the tribe is seen as a prerequisite for becoming the leader of ISIS.

Aymenn al-Tamimi, a researcher at Swansea University focused on ISIS, said the name was unknown but could be a top figure called Hajj Abdullah whom the U.S. State Department had identified as a possible successor to Baghdadi.

‘It could be someone we know, who perhaps has just assumed this new name,’ said Tamimi.

It had been widely rumoured that Abdullah Qardash, a former security henchman of Baghdadi who is nicknamed ‘The Professor’, was set to take the top job.

Qardash, a former officer in Saddam Hussein’s army, had met Baghdadi in a U.S. prison in Iraq after the U.S. invasion.

On Telegram, a messaging service, the Amaq news agency linked to ISIS has continued to post claims of attacks in the Middle East.

Baghdadi died after fleeing into a network of underground bunkers and tunnels that snaked through the compound in Syria, Trump revealed on Sunday.

Duration Time2:45The terrorist leader wore a suicide vest and dragged along three children as he fled from the American troops who had arrived by helicopter from Iraq.

Trump said that as U.S. troops and their dogs closed in, the militant went ‘whimpering and crying and screaming all the way’ to his death.

‘He reached the end of the tunnel, as our dogs chased him down,’ Trump said. ‘He ignited his vest, killing himself and the three children.’

Trump also declared two days ago that Baghdadi’s ‘number one replacement’ had been ‘terminated’, apparently referring to spokesman Muhajir.

Muhajir was killed on Sunday in a joint raid between Kurdish-led and U.S. forces in northern Syria, a State Department official confirmed on Monday.

Russia had previously voiced doubts about whether Baghdadi was really dead after numerous false rumours of his death over the years.

The American troops had confirmed his identity by matching his DNA to an Iraqi prison where he was held 15 years ago.

Baghdadi had been detained in Iraq after the U.S.-led invasion which toppled Saddam Hussein in 2003.

The operation against Baghdadi has already prompted fears of revenge attacks by followers of the terrorist leader.

A military operation led by Kurdish fighters in the Syrian Democratic Forces reduced  Baghdadi’s so-called ‘caliphate’ to nothing earlier this year.

However, Baghdadi was widely seen as a figurehead rather than a day-to-day leader and his followers are still capable of mounting attacks.

Small units of fighters have since gone underground and continued to carry out guerrilla-style attacks in the region.

Security has been tightened at ISIS prisons in northern Syria where Kurdish guards were said to be on ‘high alert’.

Baghdadi had urged his followers to break ISIS fanatics out of prison in the last weeks of his life.

There are also fears that ‘sleeper cells’ around the world will carry out reprisals, and Britain and France have both stepped up security.

Obasanjo says annulment of June 12 presidential election was due to...