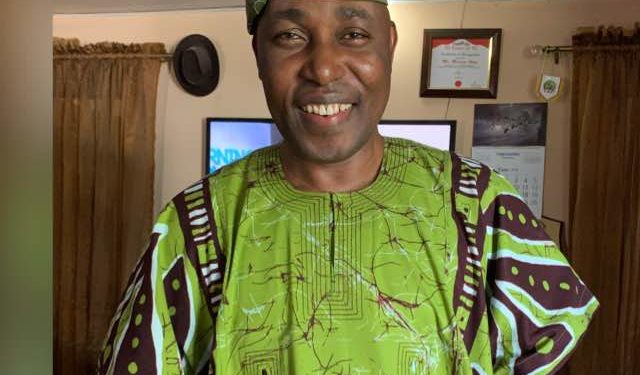 I was at a quite significant event last Thursday in Ikeja, Lagos in honour of a significant journalist, Mr. Dapo Olorunyomi, who we can conveniently describe as a symbol of consistency and integrity when it comes to good journalism and long-drawn struggle for democracy in Nigeria. I was there not as a resource person, but to deepen my understanding as a learner and a leader writer (editorialist) at a perilous time such as this. I took some notes, I would like to share with those who do not understand the significance of General Chris Ali’s ‘thesis’ in his book I have been quoting here: ‘Federal Republic of the Nigerian Army’.

It has been disappointing that the event speaks to a general observation in recent time that there are not many reporters who understand history of struggle for democracy and democratization in Nigeria anymore. The event, which ordinarily produced so many front-page scoops and several revelations didn’t make front pages as expected. The event attracted many senior journalists who have retired from reporting and writing. I mean the event has been poorly reported so far.

There were so many points at issue that would have been contextually reported in those days before democratic civilization ‘kicked us in the face’ in 1999. Even the title of this article, ‘…the monster has returned’ was a context that would have been well reported as a page-one lead. There were so many other story leads from the very remarkable resource persons who spoke clearly and boldly at the colloquium on Citizen Dapo.

The three events: The theme of the colloquium KEEPING POWER IN CHECK: A conversation on ‘the shrinking media & civic space in Nigeria’ and public presentation of a book titled ‘TESTIMONY TO COURAGE: Essays in Honour of Dapo Olorunyomi’, which was also spiced by launch of a ‘new feature on the PRESS ATTACK TRACKER (AsariTheBot)’ produced numerous subtexts, which point to the fact that we have taken the present danger to democracy for granted in the country. And we will face the consequences of our rampaging complacency sooner than later.

Since this is not a news report of the event, attributing subtexts to these speakers could worsen our already complicated complacency as incurable defenders of any status quo can easily begin to use their digital weapons to dismiss the useful submissions of these symposium speakers as the usual ‘aluta people’.

Let’s just relax to read my contextual notes not in a particular order. This is just a notebook of a concerned participant who has been worried too about our ‘shrinking media and civic space’ at a such a time like this when we are beginning to lose democracy again to an emerging republic of another unknown ‘soldiers of fortune’.

Let me state here that the book was not presented by any known politically exposed people. They were not invited. The only ‘politically exposed person’ there is a senior journalist, former Editor of ‘The Nation’, Mr. Gbenga Omotosho, now Lagos state Commissioner for Information, who represented the Lagos State Governor. The book’s chief presenter, Mr. Falana, just randomly dragged most of the speakers to present the book, which had already been reviewed in Abuja by Prof. Chidi Odinkalu, (according to Dr. Ifowodo). Nobody announced any public donation to launch it as we often do here.

The moderator was so resourceful that his posers to the panelists too produced pertinent constructs to the never-shrinking national question and the military structure that has held the country down since 1966. One of the discussants said, we should not be deceived about the present state of anomie as we do not have a democracy or ‘any power at this time we need to keep in check’.

The lawyer noted that we should be thinking of how ‘we should displace or replace the present system’ that is not working for the people. We were told that, ‘we need to grow a system we can keep under watch’. In the view of the radical lawyer whose local hat always tilts to a particular corner, ‘as we oscillate between hope and despair’, we should be persuaded at this time that, ‘the democracy we practise now is not capable of being grown. It is not working… we need to displace it…’

One of the two female members of the panel was angry with the system of education just producing certificates and illiterates of the 21st century that Alvin Toffler once noted can’t learn, unlearn and relearn. She concluded that we should be sad about a society that is uneducated, which ‘cannot keep powers in check’. She added that most of the critical voices that could have been doing that are ‘being outsourced’.

One scholar who just stepped down from a Niger Delta development agency as a board member was so seminal in his submission (in place of a review) on his analysis of how the General Aguiyi Ironsi’s Unification Decree of 1966 actually set the tone for destruction of our paradise called ‘restructuring’ we are struggling to regain. He read copiously from the provisions of that obnoxious Decree No. 34 that set the pace for General Ali’s concept of the ‘Federal Republic of the Nigerian Army’ we have also been struggling to dismantle.

A Kaduna-based civil society icon (once lost to the senate) raised the bar of the unusual discussions to honour an iconic journalist when he noted that we should not be carried away by sophistry of the moment as he cleared his voice to say we should be prepared for the pre-1999 pro-democracy warfare moods. He said emphatically, ‘the monster has returned’. He warned the civil rights activists and political journalists who are seeking to dignify and expand the media and civic space to recognise the consequences of leaving the civic space to only the like of Charlie Boy and the political parties.

He argued that the political parties today ‘cannot defend this democracy’ already at risk of failure. He spoke straight to the conscience of the nation when he disclosed that participants at the colloquium should note that banditry and abduction have become so devastating to the already vulnerable people in the north to the extent that ‘villagers have been selling their houses and farms to pay ransom’ to kidnappers and bandits. He encouraged the sleepy civil society and the media to ‘remain vigilant’.

He also encouraged activists to overcome the present spectre of ‘fear and silence’. Before he stepped down from the podium, the senator who first warned about the hypocrisy of using deodorant to pursue some suspects while using insecticides on others in fighting corruption also wanted people to know about helplessness of the state in fighting terrorism and banditry when he also revealed that generals, police chiefs, security chiefs, senators, etc and their orderlies now prefer the Abuja-Kaduna train service, to transit between the nation’s capital and the political capital of the north, Kaduna.

He would like the civil society and the media to rise up and defend democracy that can’t provide security and welfare for the people at this moment.

Two other deliverables to the participants before another third term hidden agenda lid was removed were facts that: ‘the right to be partisan is what makes us to be citizens’. The other one is that we should not lose sight of the essence of struggles for democracy itself. And so we should always work at solutions, actionable models, not just rhetoric as a classic tells us that, ‘the challenge of the 21st century is how to make democracy safe’. And so we should not be discouraged by ‘the number of times we have failed but we should always be working on how we can succeed to make democracy safe in Nigeria’. That was the message I asterisked in my notebook.

I hinted at this possibility on this page last week. They had denied this plot before. Last week, I noted here that there could be some correlation between the state’s plot to muzzle the press and a third term agenda.

One of the icons who had paid his dues on the struggle-for-democracy beat, Femi Falana (SAN) hinted at this during his closing remarks as Chairman of the occasion. He looked into the seed of these undemocratic times and noted that Buhari should be suspected of a third term agenda from the way his government has been warming up to fight the free press.

Specifically, Falana said the attack on free press in the country could be over a third term agenda being nursed by the federal government. Curiously, he (Falana) also revealed much more about the unfolding agenda in Abuja. He accused Justice Ijeoma Ojukwu of the Abuja Federal High Court of bias against his client, Omoyele Sowore, saying the ‘Sahara Reporter’ publisher had been convicted without trial.

Falana noted that he had decided not to return to the Justice Ojukwu-led court.He revealed what judicial reporters had failed to report in Abuja: “Nobody has been given the kind of bail (condition) Sowore was given. All those who looted the treasury have never had their movement restricted. Sowore has been granted bail, but his movement has been restricted to Abuja. His family is in America. He does not live in Abuja. He has no house in Abuja. Yet, he has been asked to stay in Abuja.

The trial may last for 10 years, but he cannot leave Abuja. It has never happened in Nigeria before. Sowore has been banned as a journalist from speaking. As a politician, he cannot address a rally until the case is determined. We don’t know how long it will last.”

Falana said since he had been practising law for 37 years, he had never witnessed the sort of drama that transpired in the court last Wednesday during the trial of Sowore. He said he was shocked when he arrived at the court and saw gadgets being prepared for prosecution witnesses who could not testify in the open court…“ All proceedings and hearings should be in the open. So, if you are going to have anything in camera, for security reasons, for the interest of children, you will apply in the open court.

But no application was made. And so, when I asked what happened and the judge pretended not to know, I said, ‘My lady, this case cannot go on because behind us, your court has colluded with the prosecutor to take witnesses behind us in your court and these are the gadgets here.’ I said the prosecutor had confided in me that the witnesses would pass through her door so that they would not be seen by us…

There are much more. But wait for this: There were also sacred facts at the unusual forum, which showed strangely that the judges under the military regime were more courageous than judges in a democracy. One of the panelists, an ace judicial editor was embarrassed by his own fact file. We will continue from there this week…

Tributes, cries as Col. Bako is buried in Maiduguri

Nigerian Air Force A-29 Super Tucano: All you need to know

Kano- Maradi Railway: Before we Politicize Infrastructure, By Olawale Rasheed

After Northern and Southern Governors Butting of Heads: What Next? By...