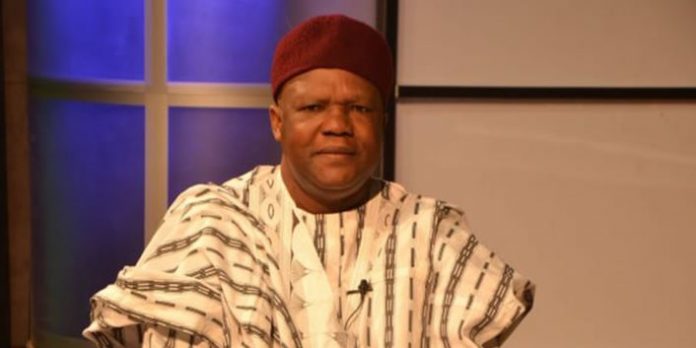 A former Deputy Governor of the Central Bank of Nigeria, Dr Obadiah Mailafia, on Wednesday appeared before the Department of State Security Service (DSS).

It was learnt that Dr Mailafia showed up at the office the DSS following invitation by the agency to give further information on the security situation in both the North East and North Central of Nigeria.

Before his arrival on the premises of the DSS, the vicinity was besieged by his loyalists mostly members of different socio-cultural groups within the Middle Belt, including members of the Middle Belt Forum and Association of Middle Belt Ethnic Nationalities.

Despite the heavy presence of men of the DSS, his loyalists insisted on remaining in and around the vicinity until he came out of the office of the DSS.

As of the time of filing this report 3:08 pm on Wednesday, Dr Obadiah and his lawyer, Pius Akubo SAN, were still with the men of the Department of State Security Service (DSS) in Jos while his supporters keep waiting within the vicinity.

The DSS released Mailafia after questioning him. He spent six hours with his interrogators.

He was barred from speaking to journalists outside the premises.

To prevent this, he was smuggled out through the back doors.

His wife, family members and friends came to demonstrate solidarity with him at the DSS office in Jos.

Nigeria at 59: Pastor Olukoya urges Nigerians to live in peace,...