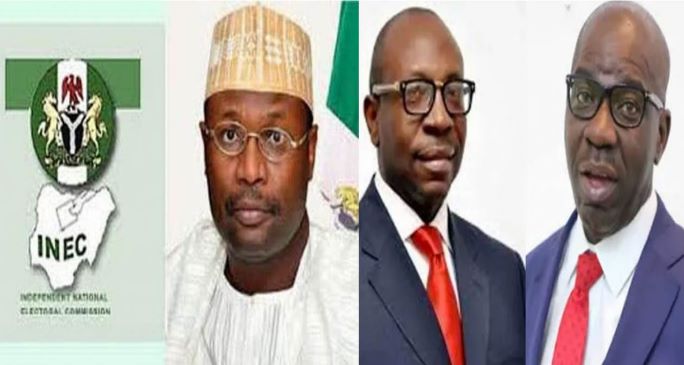 The Independent National Electoral Commission (INEC) has said that it would not hesitate to discontinue with conduct of the Edo governorship election if it perceived any form of violence.
The Commission handed down the warning to political parties and candidates participating in the September 19, 2020 election on a day its Chairman, Prof. Mahmood Yakubu, lamented the inability of the Commission to punish Electoral offenders.
“I have said this over and over again that any nation that does not penalise its electoral offenders is doomed,” Yakubu warned.
The INEC Chair spoke during a Live TV and virtual citizens’ townhall meeting on electoral reforms held Tuesday.
The event was organised by CSO YIAGA Africa and other partners.
According to him, “we are essentially concerned about the failure or inability to penalize electoral offenders.
“This has been at the heart of the many challenges we face when elections are declared inconclusive simply because of violence.
“At least over the last eleven years, recommendations have been made by one committee after another, and it appears that there is a convergence of intentions, particularly between the Executive and National Assembly on the issue of punishment for electoral offenders.
“I recall the recommendations of the Uwais Committee, nothing was done on the recommendations of that committee; in 2011, we had a major post-election violence, the Lemu committee made the same recommendations, accepted the white paper by government.
“But we didn’t make progress; there in 2015/2016, this administration set up the Ken Nnamani committee and made the same recommendations.”
He recalled that, “there had been motions also on the part of the National Assembly with several, private members Bill for the establishment of electoral offences commission and tribunal.
“We hope that this time around, as part of the reforms of our electoral process, we will pay particular attention to that issue.
“At present, the commission is saddled with the responsibility that I have repeatedly said that there is neither capacity nor absolute legal backing to implement.
“For instance, INEC is saddled with the responsibility of prosecuting electoral offenders. How do you prosecute electoral offenders when the first step towards prosecution is arrest?
“INEC has no police, we have to rely on the regular police. I have been working with the Inspector-General of Police towards that.
“Arising from the general elections conducted last year, 16 case files have been forwarded to the commission and we are prosecuting those offenders in the places where we are aware the offences were committed as provided by law. But we have our constraints in that respect.
“Secondly, there has to be proper investigation that will lead to evidence that will lead to prosecution of offenders.
“We simply don’t have the capacity to investigate offences committed. But here we are saddled with the responsibility to prosecute electoral offenders”.
He added further that, “we have very good and conscientious staff members.
“But some of the offenders may be the commission’s old staff. It is very difficult for any organisation to penalise or prosecute itself.
“So, we completely agree with the recommendations made by the previous committees and the kind of motions we have had from the National Assembly to the private members Bill to establish electoral offences commission and tribunal.
“I have said this over and over again that any nation that does not penalise its electoral offenders is doomed.”
Meanwhile, INEC National Commissioner and Chairman, Information and Voter Education Committee, Festus Okoye, has stated the position of the Commission during a programme, fixing Nigerian Election, monitored on a national television.
According to him, INEC will not take lightly any attempt to compromise the safety of its staff and other workers deployed for the election.
“Politicians should not dare us; we will discontinue the process if we perceive any violence. Some of the people we mobilize for elections are workers in Federal Institutions as adhoc staff and no organization will mobilize people to go and be killed”, he stated.
Please follow and like us: