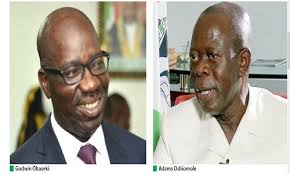 I read several comments made by Hon Charles Idahosa, trying to paint Oshiomhole in the image of the devil. Ironically, he was Oshiomhole’s political Adviser for eight years.

In a recent interview, Comrade Oshiomhole explained very vividly the issues in Edo APC, so I will not repeat them. But, it will be laughable for Hon. Idahosa to think that Oshiomhole, as National Chairman of the APC, will keep a blind eye to happenings in Edo APC.

He is known to be a winning machine and he will not want any issue that will create problem for the party in future. However, I was happy when Hon. Idahosa confirmed some of the issues my boss raised as regards the crisis in Edo APC when he narrated how Governor Obaseki tried to frustrate him out of the party until Oshiomhole waded in and stopped him from leaving the APC. So, at what point did he now become the governor’s spokesman?

The same Hon. Idahosa earlier in the administration of Governor Obaseki advised the governor to embark on ethnic politics, so as to rubbish Oshiomhole, but Oshiomhole has done more for the Binis than any Bini governor. The same man who is preaching Bini agenda, is the same person who is protesting the emergence of the former Deputy Governor, Dr Pius Odubu as chairman-designate of the Niger Delta Development Commission (NDDC); the first time such a position will be coming to Edo State, and Edo South for that matter.

Who blamed Oshiomhole for the emergence of Chief Victor Ekhator as Edo State representative in the board of NDDC? Is Chief Ekhator an Afemai man? As a matter of fact, Chief Ekhator is one of Omo N’Oba’s Enobore chiefs. Enobore chiefs, in the palace system are the ones who hold the Omo N’Oba’s arms whenever the Oba is in full traditional regalia. Is Hon. Idahosa not supposed to be happy as a Benin man, on the emergence of Odubu and Chief Ekhator, rather than querying who was instrumental to their emergence? I also read him accusing Oshiomhole of abusing Benin leaders including Chief Igbinedion. The same Hon.

Idahosa told us how former Governor Lucky Igbinedion sacked him as Commissioner for Information, after which he declared war on that family. Oshiomhole was still at the NLC when Idahosa was abusing Chief Igbinedion, the Esama of Benin and late Chief Anenih of blessed memory. He was pained that former Governor Igbinedion dumped him for Ize-Iyamu, and as a result, he declared war on the Igbinedions and Ize-Iyamu. So, why will he now try to use Oshiomhole’s name to settle scores with these same people? He is free to choose his friends but he should leave Oshiomhole out of his problems.

I have read several negative comments being made against the administration of Comrade Adams Oshiomhole in Edo state as regards the Benin Water Storm project. It did not come to me as a surprise because some political merchants who were behind it were bent on bringing the name of the national chairman of the ruling APC into disrepute for their selfish political gains. I was privileged to be a reporter who covered Edo state for over twelve years, so I can comfortably debunk the lies being peddled by Oshiomhole’s political adversaries.

First, the impression being created in some quarters that the N30billion Benin Water Storm Project executed by the Oshiomhole administration was a failed project, is rather unfortunate because the people peddling this falsehood, know for certain what was achieved with this laudable project.

As a journalist who practiced for over twelve years in Edo State, I recall in 2008, when Comrade Oshiomhole assumed office as Governor of Edo state, many houses in Benin City were submerged by flood while several lives were lost. I recall on one occasion when a little child died around Aruosa Street, Upper Sakpoba Road, due to the menace of flooding and Oshiomhole visited the family where he promised to tackle the problem. Flooding was one of the major problems Oshiomhole inherited as governor of Edo State.

The Teachers’ House around Siluko was abandoned, and over 50 houses around that area were submerged. He was particularly disturbed that this was happening in Edo South; an area that gave him the highest votes. He invited experts to study the topography of Benin City, with a view to finding lasting solution to the problem. He was told that unless that problem was fixed, he would be wasting his time constructing any road or embarking on his urban renewal project.

The Storm Water Master Plan took about 12 months of study which was carried out by Eurekon, one of the best companies in the world renowned for handling such projects. The company has handled other projects in Nigeria including the Atlantic surges at the Lagos Bar Beach.

Eurekon, the South African company recruited over 400 surveyors in Edo State, doing topography mapping just to profile water-flow, establish watersheds and determine the final flood water destination during the rains in Benin. They identified Ikpoba River Ogba as the place where the water would be channeled. However, the study showed that three quarters of flood waters end up in Ogba River, because of the topography, as water does not flow up, but downwards. If it must be made to flow up, then mechanical devices – pump and constant power – would be needed.

What Oshiomhole’s government did was to identify the lowest point in Benin, where water could flow and where eventually it would end.

Following the study, the administration identified a two-pronged approach, which was adopted. First, government looked at the low-hanging fruits: these were areas where former two-time governor of old Bendel state, the late Dr. Samuel Ogbemudia had put some underground drains. Focusing on those areas, Oshiomhole put drains that would connect to those undergrounds constituting the primary drains that de-flood the city. The secondary drains on the sides of the roads that are visible to the eyes are only ancillary in the process and to protect the roads. If there are no primary drains to which they are connected, the flood problem would be transferred from one area to another.

Significantly, Oshiomhole’s administration confronted the expensive nature of the primary drains. For instance, he constructed underground drains on the Airport Road, which were as deep as 22 feet. His administration also constructed an open concrete canal of about 45 feet wide and 15 feet deep, covering a distance of 7.5 kilometers; a network of covered concrete tributary of smaller canals, covering over 7.8 kilometers and the reclamation and reconstruction of nine intra-city roads, with side-drains, walkways, street lights and lawns. Underground tunnels that cars can comfortably drive on if they were not covered were part of this project. We have about 23 catchment areas in Benin, taking the flow of water in 23 different directions, straight into the Ikpoba and Ogba rivers. The Upper Lawani catchment, which is a storm water project, had been completed with the one around Ugbowo Road to Eghosa Grammar School receptacle, where flood waters are discharged into the Ikpoba River. There was a storm water project at the Five Junction, connecting eleven streets. The administration dealt with a basin flood that had twenty routes. The entire area was subjected to a complete urban renewal through infrastructure development.

Another issue I will also want to bring to the attention of the public is that the N30 billion storm water project was not solely for the drains. It includes construction of roads, street lights and walk ways in the affected areas. There were about eleven roads within that catchment, which includes Igbinaduwa whose road is a drain; it is a massive drain and the road sits on top. The idea was to create a tributary for the other drains to flow into at that primary level en-route the river. Oshiomhole’s administration completed 70 per cent of this project. The drains from the river had been taken up to Siloko Road and what was left as at 2016, when Oshiomhole left office was for the Obaseki administration to continue the drain from Adolor College Road, which is the upstream area and that would have also helped collect the flood waters from the Uwelu Spare Parts Market area.

Unfortunately, like the Benin Central Hospital project which was executed by the Oshiomhole-led administration and abandoned; the Benin Water Storm project was also abandoned which has brought back flood in the City. What the present administration needed to do was to constantly maintain the components that had been completed.

Little money is needed to clean the drains, and the flood water will find its level. It is unfair for mischief makers to try to rub the name of Comrade Adams Oshiomhole in the mud as regards the N30 billion Storm Water project. That administration completed six of the 23 catchments areas and continuation is required by the current administration in order to find a lasting solution to the problem. Oshiomhole is no longer governor of Edo State; he would have completed this project if he were still in office. It is a huge project that another governor, even after Obaseki, will also continue.

The incumbent governor was chairman of the Economic Team in that administration; he was part of the system, so, he is well abreast of the project. I recall when the American ambassador and other officials of the American government visited Edo state then, they went on a tour of some of the projects executed by Oshiomhole and they singled out this particular project as one of the best initiatives of that administration. They described it as a ‘sexy project,’ meaning that it was a project that may not easily get the admiration of the public because it was underground, but one that would determine the urban renewal project of the state government.

The truth is that the ordinary politician who wants to be praised on a daily basis will not embark on such capital intensive project, because they are underground projects. But, Oshiomhole decided to take the bull by the horn due to the cries of the people of Benin City and its environs. So, I feel sad when I read comments by some uninformed persons and mischief makers making frantic efforts to turn the truth upside down in the name of politics. Few people, due to their selfish interests, have embarked on campaigns of calumny against that administration; sponsoring their social media boys, to misinform the people, but darkness can never over shadow light. No matter how much they try, Edo people are proud of what God used Oshiomhole to achieve in Edo South and other senatorial districts of the state, and nobody can erase those laudable legacies of Oshiomhole.

OF RASCALS, RADICALS AND REBELS, By Tunde Olusunle