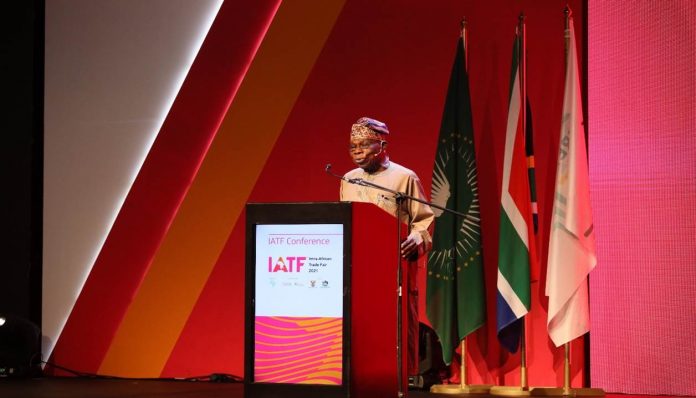 The second Intra-African Trade Fair (IATF 2021) ended on Sunday in Durban, KwaZulu-Natal, South Africa, with a collective commitment to ensure that the economic stimulation triggered by the event translates into the continued strengthening of the African Continental Free Trade Area (AfCFTA).

Speaking during the closing ceremony of IATF 2021 at the Durban International Convention Centre, Chief Olusegun Obasanjo, Chairman of the IATF 2021 Advisory Council and former President of the Federal Republic of Nigeria, expressed his gratitude to the KwaZulu-Natal Province for successfully hosting IATF 2021, and fully bringing the vision of the AfCFTA to life in a tangible and measurable way.

“It is no mean feat to have secured seven sitting presidents for the opening ceremony who stayed for hours during the entire programme,” said Chief Obasanjo. “Thank you immensely for all you have done to make sure this event takes place,” he added, promising to meet everyone in Abidjan, Côte d’Ivoire, in 2023.

Prof. Benedict Oramah, President of Afreximbank, indicated that the road to Abidjan would commence immediately, with the launch of the IATF 2023 website registration portal, which is now live. “We will overcome the challenges we experienced with IATF 2021 and leverage the progress of the AfCFTA over the coming two years to make IATF 2023 an even more resounding success,” he concluded.

H.E Wamkele Mene, Secretary General of the AfCFTA Secretariat, complimented Afreximbank’s efforts in empowering and supporting free trade in the continent, saying the Bank had in the last two years pumped in close to US$25 Billion towards financing trade engagements within the Continent.

“Not a single Country in Africa will be able to compete globally alone, hence African Countries must just integrate the market, something that has been evaded Africa from 1963, when our forefathers hatched African Unity,” said Mr. Mene.

Speaking on behalf of the Premier of KwaZulu-Natal, the MEC for Economic Development, Tourism and Environmental Affairs, Hon. Ravi Pillay underscored the need for the prioritisation of Africa’s industrialisation process. “It is important that we trade in products we have made – how can we be proud to trade in goods that were made elsewhere?” he said.

On the topic of Africa’s willingness to adjust, Mr. Pillay said that the IATF 2021 had been a great demonstration of the combined political will towards supporting the AfCFTA. He expressed the province’s gratitude for the privilege of hosting the IATF 2021.

Mrs. Kanayo Awani, Managing Director of Afreximbank’s Intra-African Trade Initiative, explaining that the standards that had been set for this second edition had been based upon the learnings from IATF 2018 in Cairo, Egypt.

Mrs. Awani announced that the business deals signed and concluded as of 21 November 2021 amounted to US$36 billion, exceeding the US$32 billion mark set at IATF 2018. She explained that additional deals were still going on and that some of the deals already closed were still being compiled.

Other key event statistics were:

• 59 countries attended and exhibited at IATF 2021, including 46 African states

• Participants at IATF 2021 came from 128 countries around the world

• 70 sponsors, 51 of whom had exhibition stands

OAU reopens for completion of examination

#EndSARS: We will compensate families of slain policemen- Makinde