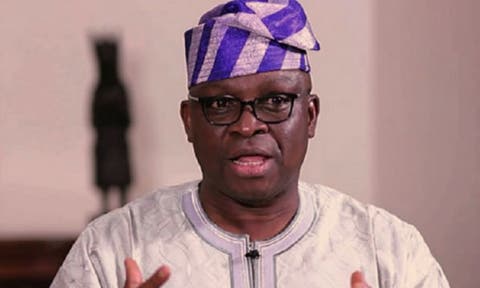 Former Ekiti State Governor, Mr Ayodele Fayose, said on Sunday evening  (August 30) that he had not endorsed the 2022 governorship ambition of an ex-governor, Chief Segun Oni.

Fayose had on Saturday, during a Peoples Democratic Party congress, officially received Oni, who had earlier left the party for All Progressives Congress before returning recently.

Fayose, in a series of tweets, urged members of his group, the Osoko Political Family, to accord Oni with all respect, saying that “does not represent or amount to an endorsement of Oni’s gubernatorial ambition”.

He tweeted, “To my brothers and sisters in the PDP Osoko Political Family, having formally received Engr Segun Oni into the PDP at yesterday’s (Saturday’s) State Congress, henceforth, nobody should castigate, embarrass or undermine him (Oni) on any social media platforms associated with Osoko Political Family.

“True leadership is demonstrated by forgiveness, followed by restoration after a show of true humility. However, this statement does not represent or amount to an endorsement of Engr Segun Oni’s gubernatorial ambition.

“Rather, it is part of our sincere efforts to keep the party together and accommodate everyone, except those members who are due for political perdition.”

Oni had while addressing the delegates and party members, said he felt elated to return to the PDP and realign with those he had worked with in the past and those he could trust in party politics.

Oni said, “There are people that had been lost and we are back. I thank our leader, Mr Ayodele Fayose, and other leaders. This party belongs to Nigerians and ready to take its rightful place.

“We must encourage everybody to be here. Very soon, we will get good news from Edo and Ondo states. We are winning Ekiti and we will sweep across Nigeria. We (PDP) will be able to bring the best of development,” Oni said.