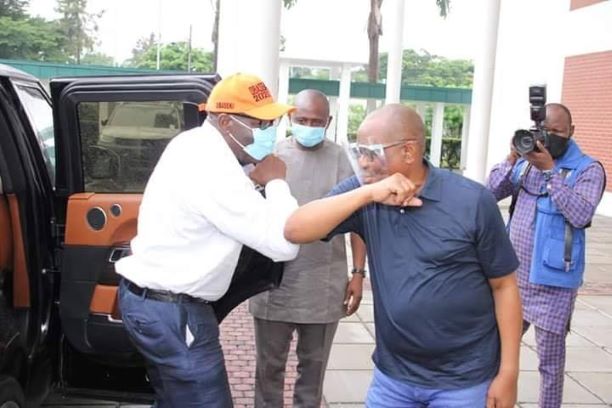 Rivers State Governor, Nyesom Wike, has explained that he did not opt out of reconciliation in the Edo Chapter of Peoples Democratic Party (PDP) because of reservations against Edo Governor Godwin Obaseki.
At the peak of the moves to get Obaseki the PDP ticket, Wike had opted out of reconciliation, accusing some unnamed members of the National Working Committee (NWC) of being tax collectors.
Wike, however, said he took the action to save the party, denying it was to frustrate Obaseki’s efforts to win the ticket.
He also accused the minister of Transport and his predecessor, Rotimi Amaechi, of being a man of violence.
Speaking on Arise Television, Wike said: “I have always said that politics is where you must carry everybody along. Sometimes, there can be disagreements but the ability to reconcile everybody is important.
“Particularly as an opposition party, it is healthy to have division. There is no need to make people think that you don’t want them. I told Governor Godwin Obaseki so and anybody who knows me understands that I am not against anybody.
“After the primary election now, everybody is very happy and Governor Godwin Obaseki, is at home. If we have allowed what was going on then to continue, you will be alarmed at the level of division that will erupt and it will be like what you see in APC.”
He recalled that some All Progressives Congress (APC) supporters threatened and actually attacked the State High Court because of internal party squabbles and the security agencies did not bring the perpetrators to justice.
Wike said these pro-Amaechi supporters were courageous because their pay masters had assured them of security cover.
“It’s really unfortunate that some people can now want to destroy the state. They issue threats and the security agencies cannot come out to say we can’t tolerate such threat against the peace and existence of the state.
“I will not go to court against anybody because the threat is in the public domain. It is obvious, that they have the Police, Department of State Security, Air Force, Navy and the Army.
“Otherwise, how do you explain the long silence of the Nigeria security agencies over such threats already trending online?
“For whatever reasons, why won’t they bother about the person making such threats because of an internal problem within APC.
“Remember, for the first time in the history of this country when Chibuike Amaechi was governor, he shut down the courts for two years. Based on that experience, more threats and attacks are seen.
“The minister is now coming to say that he is not a man of violence which is not true. We are not children to be so deceived.
“During the campaign leading to 2019 elections, he came to the state chanting war songs and nobody cautioned him,” he stated.
Please follow and like us:

Fuel crisis may have adverse effect on inflation, says Statistician-General

2023 Presidential Ambition: Aregbesola speaks as reports of fracas with Tinubu...