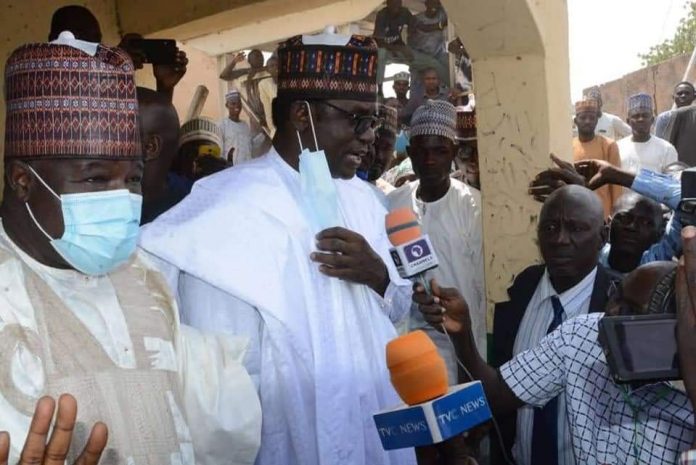 Former Chairman of the Peoples Democratic Party (PDP), Senator Ali Sheriff, on Saturday, declared his readiness to run for the chairmanship of All Progressives Congress (APC) if the position is zoned to the North East.

Sheriff, who was surprisingly sighted with Yobe State Governor, Alhaji Mai-Mala Buni at Buni Gari during Yobe State Local Government Election on Saturday, said: “In APC, we have respect for the constitution of our great party, and if the position of the national chairman is zoned to the North East where I came from, I will contest God willing.”

Sheriff, who was the governor of Borno State between 2003 and 2011, had after losing out as chairman of PDP returned to the All Progressives Congress (APC), which he helped found.

Sheriff’s presence at Buni’s polling unit where he holds no electoral value other than moral support, is an indication that he may be looking for the support of the Yobe State Governor, who is also the Chairman of the ruling All Progressives Congress (APC) Extraordinary/Convention Planning Committee, to get elected as chairman.

Speaking at the polling unit, Sheriff expressed optimism that APC candidates would emerge victorious after the polls across the state.

After casting his vote, Buni commended the orderly, peaceful and transparent manner in which the election was held in all parts of the state.

Buni, who cast his vote at about 1:15 pm on Saturday at Bulturi Yerimari Lewa Gate Code 004, Buni Gari, his home town in Gujba Local Government Area, said the success of the exercise in Buni Gari and other parts of the 178 wards across the 17 local government areas of the state had shown that peace had returned to the state.

He said this would strengthen the people’s confidence in the Local Government administration in the state.

Buni while saying the local government election was of great significance, pointed out that it marked the first elective transition in the third tier of government since his assumption of office in May 2019.

He commended the election umpire, Yobe State Independent Electoral Commission (YBSIEC) under the Executive Secretary of Dr Mamman Mohammed, for preparedness and high standard maintained in the conduct of the exercise, urging them to sustain the tempo.

He said; ” I am very impressed to cast my first vote along side my people in Buni Gari. As you are aware, since the emergence of Boko Haram over a decade ago, myself and my people were unable to cast our votes in this place. The whole of Buni Gari and the entire Gujba Local Government Area were hitherto displaced, and we normally cast our votes in Damaturu, the Yobe State capital. But we thank Allah (God) making it possible for us to exercise our franchise here in Buni Gari my hometown after restoration of peace in all nooks and crannies of the state.

“We also want to thank President Muhammadu Buhari and our security agencies for the commitment towards ending the menace of insurgency and other criminalities in the state and the country as a whole.”

The governor added that: “I think this is one of the most peaceful Local Government elections we’ve ever had. I reiterate, i drove all the way from Damaturu down here to my home town Buni Gari to exercise my franchise and also tried to monitor situations on my way. Its been quite peaceful. I like the large turn out and orderliness, the peaceful conduct of the elections. I’m also impressed with the preparedness of YBSIEC, the quality of materials, the conduct, I think it’s very commendable.”

Meanwhile, the Executive Secretary YOSIEC, Dr Mohammed in an interview said; ” Two hundred and seven candidates from six political parties are vying for chairmanship and councillorship in the polls which cut across the 17 local governments and 178 wards with 1, 714 polling units.”

Our Correspondent observed that there was a massive turnout of voters who conducted themselves peacefully in Gujba and Potiskum local government areas.

Also in Damaturu metropolis and its environs, the election was conducted amid tight security.

Nigeria will no longer tolerate harassment of Its citizens in Ghana...

Magu’s probe, suspension ‘a plus’ for Buhari’s government – Malami