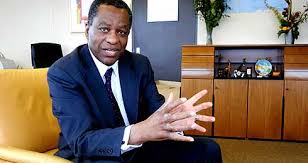 Minister of Foreign Affairs Geoffery Onyeama has said that Nigeria and its image abroad cannot the judged by the actions of a very few criminal elements who give the country a bad name.

Onyeama, who was the special guest on News Agency of Nigeria (NAN) Forum, said despite the involvement of a few Nigerians in the recently uncovered high profile scams, many more Nigerians were doing good and positive things abroad.

He described as unfortunate the perception in the media that bad news made better news than good news.

The minister called on the Nigerian media to shine its lights on the good deeds of Nigerians abroad.

He, however, noted that no country in the world had taken action against Nigeria on the account of the bad deeds of an individual.

“Another thing we do is also to highlight the positive things that Nigerians are doing around the world.

“You the media, of course, we all know that no news is good news, what sells and excites and interests people are sensational news, so there is also that element.

“So, I think the challenge is for us to always be bringing up the good things that Nigerians are doing.

“Like some few days ago, the Nigerian in Japan, who found a huge amount of money, he returned it and he was entitled to ten per cent, but he declined the 10 per cent reward.

“Nigerians are winning awards everywhere; Nigerians are among the groups in the U.S that perform the best academically and the most dynamic.

“The task for you and the media in general is to highlight those facts so that the narratives could also change and should not just be focusing on the negative.”

He said that Nigeria would not support any of its citizens who engaged in criminality but would surely cooperate with any country to root out criminal elements from Nigeria.

On the issue of attacks on Nigerians abroad, the foreign minister emphasised that all the recorded attacks had not been by State actors.

He noted that Nigeria was engaging, at the highest level, with all the countries where it had its citizens to ensure that they and their properties were protected.

While noting that there are a few Nigerians, who give the country a bad image abroad, he urged Nigerians abroad to always be of good conduct and obey the laws of their host countries.

“We keep reiterating to our people who are going abroad to respect the laws of the countries in which they find themselves, but crimes exists everywhere, it is not just Nigerians that are engaged in criminal activities.

“We cannot defend, as government, criminal acts by Nigerians and I think it would be wrong for us to do so; we cooperate with other countries to address those problems.

“We also plead with Nigerians in those countries to comport themselves in a manner that is respectful of the laws of the host countries – not to engage in criminality because sometimes this can also breed resentment by the nationals.

“In a lot of cases unfortunately, our nationals, in a lot of these countries, though I would like to say is a minority, are really not comporting themselves in manners that is respectful of the laws of the host countries,” he said.

Twitter Ban: Malami has assured Adeboye, others will be prosecuted, says...

COVID-19: No travel restrictions or ban yet – Nigerian Govt