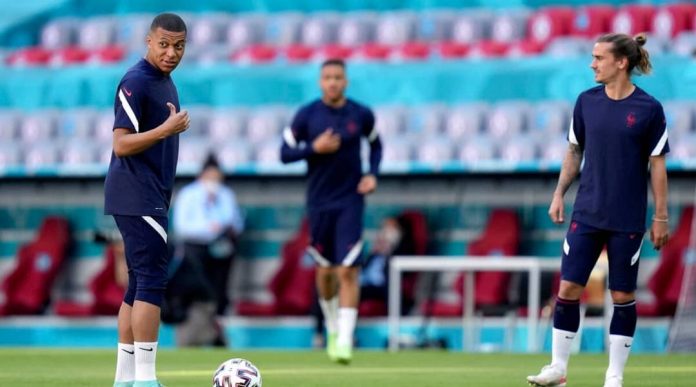 World champions France started their Euro 2020 campaign with a win over Germany thanks to a Mats Hummels’ own goal in a high-quality heavyweight Group F match.

Hummels – recalled for this tournament after being told by coach Joachim Low in 2019 that his international career was over – diverted Lucas Hernandez’s cross into his own net in the first half of a fascinating contest in Munich.

Tournament favourites France were marginally the better of the two sides, but appeared to be in third gear for much of it.

Paul Pogba sent the ball over the bar from a corner with his shoulder, Kylian Mbappe had an angled shot saved, he and Karim Benzema had goals ruled out for offside and Adrian Rabiot hit the outside of the post.

Germany came into the finals with big questions over their best XI as well as their chances of success after an uncharacteristically turbulent few years, but proved typically competitive finals opponents.

Thomas Muller – another player recalled after being jettisoned by Low – headed wide, with Ilkay Gundogan slicing an effort past the post from a good position in the box and Serge Gnabry seeing a shot deflected on to the roof of the net.

It was not just the actual football that was of interest either.

There was a hint that Germany defender Antonio Rudiger may have bitten the shoulder of Pogba in the first half, although replays proved inconclusive.

This came after a Greenpeace protestor had parachuted into the stadium, shedding equipment as he crashed to the pitch before being hurried away by security.

France’s win means they and Portugal, who beat Hungary 3-0 in Budapest earlier on Tuesday, take the early initiative in a highly competitive Group F.

▪︎France do what is required

When the draw for the finals was made, this was a standout fixture – a winners’ convention between two of the continent’s most decorated sides, containing some of the modern game’s highest individual achievers.

The two nations have five European Championship titles between them and six World Cup wins, with only three of the players starting the game in Munich without a Champions League winners’ medal in their collection.

Just to add a bit more spice, the two countries also have some on-field history, most notably the encounter at the 1982 World Cup, which included the infamous clash between German goalkeeper Harald Schumacher and France defender Patrick Battiston.

While the encounter did not produce a timeless classic, it did showcase a consistent level of skill and intelligence rarely seen so far in the competition.

France supplied much of it, with Pogba and N’Golo Kante a complimentary midfield pairing of grit and guile, and the front three of Mbappe, Antoine Griezmann and Karim Benzema a constant menace to a vulnerable German defence.

With such attacking riches at France’s disposal, it could be seen as a negative that it took an own goal to seal this win, but they could easily have added to the scoreline had the forwards timed their runs better.

At 33, Benzema can be forgiven for going early to gain an advantage and drawing the offside flag that ruled out his finish, but Mbappe has pace to burn and is less in need of the extra yard.

In the end, Hummels’ own goal was all France needed to get off to a winning start in their quest to unite the European Championship trophy with the World Cup – as they did 21 years ago.

Regardless of the outcome, Euro 2020 will be Low’s final hurrah as Germany boss, with Hansi Flick ready to succeed him after the tournament.

This is arguably the weakest German side he has taken into a major tournament – having led his nation at seven – and is certainly the least settled, with the coach still seemingly unsure as to his best XI or even best formation.

However, they still retain quality in the side, most notably in defender Joshua Kimmich and goalkeeper Manuel Neuer, and have experience now too thanks to Low’s decision to recall Hummels and Muller.

The wisdom of drafting back Hummels, though, may be questioned by some after his calamitous attempt to clear Lucas Hernandez’s cross that resulted in him shinning in France’s winner.

What was most apparent was the lack of that extra level of composure, class and self-belief so inherent in previous German sides.

They huffed and puffed after going behind but never looked like hurting the French, even with Leroy Sane, Timo Werner and Kevin Volland thrown into the mix.

It was not the calamity some feared but it was a first-ever opening-match defeat for the Germans at a European Championship finals.

France have won their opening match of a European Championship for the sixth time, with only Germany (seven) managing to do so more often. Indeed, the French have gone on to reach the final in three of the previous five tournaments they have started with a win, lifting the trophy in both 1984 and 2000 (runner-up in 2016).

The first 12 games at Euro 2020 have produced three own goals (Merih Demiral, Wojciech Szczesny and Mats Hummels), already the joint-most at any European Championship tournament (also three at Euro 2016).

Germany have lost their past two games at the European Championship, with both defeats coming against France. The Germans have had 28 shots across those two games without managing to score (18 in 2016, 10 against France).

Both France and Germany managed just one shot on target each, the lowest total in a European Championship game for the French since 2012 (v Spain), and for the Germans since 2008 (also v Spain). The last Euros encounter to see a fewer number of shots on target also involved France, in 2008 when they faced Romania (one).

Only Gareth McAuley (aged 36 years 203 days) at Euro 2016 against Wales has scored an own goal in a European Championship match at an older age than Germany defender Mats Hummels against France (32 years 181 days).

Mats Hummels is the first German player to score at both ends at a major tournament (Euros and World Cup). Having scored against France at the 2014 World Cup, he’s the second player to both score and score an own goal against them in major tournament matches after Mario Mandzukic, who did so in the same game – the 2018 World Cup final.

Manuel Neuer started his 100th match for Germany across all competitions, becoming the first goalkeeper in the nation’s history to do so.

The Expected Goal (xG) tally in the match between France and Germany stood at 1.38 – the lowest at this year’s tournament so far. In fact, it is the lowest combined tally in a European Championship encounter since Wales beat Northern Ireland 1-0 in 2016, a match which was also settled by a own-goal (0.56).

France take on Hungary in their next game in a 14:00 BST kick-off on Saturday. Germany’s task does not get any easier with Portugal their next opponents in a game at 17:00 on the same day. (BBC Sports)

Governor Ortom  to Buhari: You are president of all Nigerians, not...