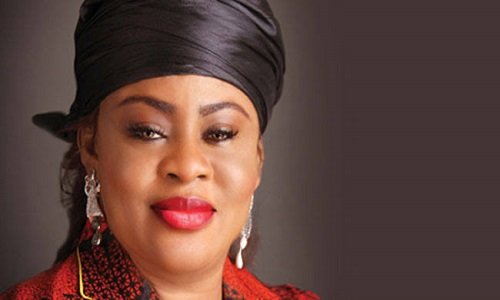 Senator Stella Oduah diverted part of N9.5 billion fund for security equipment at airports during her tenure as Minister of Aviation, the Economic and Financial Crimes Commission (EFCC) has said.

Senator Oduah, who was Minister of Aviation between 2012 and 2014, allegedly connived with banks officials to perpetrate the fund diversion and allegedly used the money to procure broadcast equipment for Crystal Television Ltd., newspaper printing press, six dredgers and quarry.

The anti-graft agency made these claims in an affidavit to support a suit filed before the Federal High Court against the senator.

The EFCC has already secured an interim forfeiture order on the items allegedly procured with the diverted fund. The order was granted on October 18 by Justice Inyang Ekwo of the Abuja Division of the FHC. The case will come up for further proceedings on November 19.

The agency said some of the dredgers and other items are being kept in many parts of the country, particularly in Bayelsa, Rivers and the Federal Capital Territory.

The EFCC’s affidavit said: “On the 13th of July 2013, the EFCC received a petition written against the former Minister of Aviation, Princess Stella Oduah, alleging that she used her position as minister to swindle Federal Government of about N22billion.

“Another petition by the National Union of Air Transport Employees (NUATE) was. received on 22nd of July 2013 alleging financial recklessness, duplication of contracts, theft and abuse of due process against the former minister.

“Preliminary investigation conducted revealed the following facts: On 7th September, 2012 the Federal Ministry of Aviation awarded a contract for the procurement and installation of security equipment at the nation’s 22 airports to I-Sec Security Nigeria Ltd at the cost of N9,443,549,531.25 only and the award was accepted by I-Sec Security Nigeria Ltd through its letter dated. 8th September 2012.

“I-Sec Security Nigeria Ltd opened an account known as ‘Project Account 2’ for the execution of the contract with First Bank of Nigeria Plc, No: 2021756955 based on an already existing mandate of an account opened earlier with the bank on the instruction of the Minister of Aviation.

“The signatories to the earlier account opened by I-Sec Security Nigeria Ltd with First Bank Plc are Ayokunle Ajayi and Apochi Igho.

“One Mrs. Shade Omoniyi, then Group. Head, Public Sector of First Bank, Lagos was I-Sec Security Nigeria Ltd’s account officer, who oversees and monitors the operation of the Project Account 2.

“The Ministry of Aviation exercised a lien on the funds paid into I-Sec Security Nigeria Ltd’s Project Account 2 as the company could only make withdrawals from the account based on milestones attained, but on the express approval given in writing by the former minister.

“The former minister abused her office and position and fraudulently conspired with Mrs. Shade Omoniyi, between 13th September 2013. and 5th February 2013 to transfer the sum of N3,289,530,738.00 from I-Sec Security Nigeria Ltd’s Project Account 2. to five companies linked to the former minister, without the authorisation of the two signatories to the account – Messrs Apochi Igho, who is the Managing Director and Ayokunle Ajayi.

“The former minister used Sabora International Ltd to apply for and obtained a loan facility of N885,711,400.00 from First Bank Plc to import six IMS dredgers and quarry equipment from the United States of America and used the dredgers as collateral security.

“Out of the sum of N836, 780,730.09 earlier transferred from I-Sec Security Nigeria Ltd’s Project Account 2 to Broadwaters Resources Company Ltd. on 5th February 2014 the sum of N838,000,000.00 was further transferred to Sabora International Ltd’s account No: 2022354121 with First Bank on 26th February 2014 as part payment to settle the loan facility of, 885,711,400.00 secured by Sabora International Ltd from First Bank Plc that was used to import six IMS dredgers from the United States of America and quarry equipment.

“Broadwaters Resources Company Ltd. was incorporated on 31ts December 2012 by the law firm of Abraham & Co and later sold to Ms. Obi Obianuju. Vivian, who made statements to the the effect that Broadwaters Resources Company Ltd.has no business relationship with either I-Sec Security Nig Ltd, Ministry of Aviation or Sabora International Ltd and had no idea how N839,000,000.00 was paid into the company’s account by I-Sec Security Nig Ltd.

Global Offshore Resources and Marine Ltd and Morgan Stem African Ltd were registered as Shell Companies by one Mr. Adeleke Adegbola, a lawyer, who later sold the two companies to Princess Stella Oduah while she was serving as the Minister of Aviation

“The former Minister of Aviation facilitated a loan facility of N1,291,865,900.00 from First Bank to Crystal Television Ltd on 4th March 2013 and an overdraft facility of N50,000,000.00 in June 2013 to set up a radio station/television network and newspaper printing press and the loan was used as lien. for the equipment.

“The former minister abused her office by fraudulently conspiring with Mrs. Shade Omoniyi, the account officer to transfer the sum of N1,600,000,000.00 from I-Sec Security Nig Ltd’s Project Account 2 with First Bank to Global. Offshore Resources and Marine Ltd on 12 February 2014 when the company. has no contractual relationship with either I-Sec Security Nig Ltd or the Federal Ministry of Aviation.

“The funds fraudulently transferred by the former minister from the Project Account 2 of I-Sec Security Nig. Ltd and used in liquidating the two loan facilities granted to Crystal Television Ltd to set up a radio station/television network and newspaper printing press and to Sabora International Ltd to purchase six dredgers are not her money or that of her companies, but funds belonging to the Federal Ministry of Aviation meant for the procurement, supply and installation of security equipment at the nation’s airports.

“The funds used in liquidating the loan facilities granted by First Bank to Crystal Television Ltd and Sabora International Ltd are the product of unlawful activity.”

Trump not planning to publicly admit defeat even after Electoral College...

Peter Obi to President Buhari: Focus on reducing poverty, not 2023...