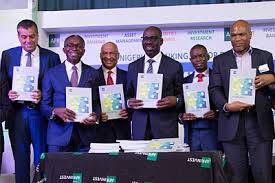 …says Governor trying to sweep scandal under the rug
…vows to stage protest if demands are not met
A Non-Governmental Organization focused on government accountability, the Coalition for Good Governance and Economic Justice in Africa (CGGEJA), has called on the Independent Corrupt Practices Commission (ICPC) to commence an immediate investigation into the allegations of funds diversion using private firms leveled against Edo Governor, Mr. Godwin Obaseki.
The embattled Edo Governor whose late move to the PDP was reportedly facilitated by a 15 billion naira payment to the national leadership of the party was accused by other members in Edo State of diverting state funds to his private firm, Afrinvest Limited, through the awarding of inflated contracts for the purpose of setting up a regional bank, PRIMUS BANK, in a petition to the ICPC.
Despite repeated calls for clarification on the damning allegations, especially with the emergence of documents showing that the Governor Obaseki awarded certain consultancy contracts worth billions of naira to Afrinvest, the Governor failed to offer a satisfactory explanation, opting instead for a woolly statement that did little to absolve him of the indicting accusations.
According to CGGEJA, Mr. Godwin Obaseki’s evasive attitude to the allegations is an attempt to “sweep the matter under the rug” with hopes that it will be forgotten as soon as the media cycle moves on from the event.
In a press conference in Benin City on Tuesday, the Deputy National Chairman of the NGO, Comrade Jude Gadimoh, called for an immediate investigation into the petition, stating that it will not relent until the matter is pursued to a conclusive end.
The group demanded: “Immediate commencement of investigations into all the allegations leveled by the petitioners against Mr. Godwin Obaseki by the ICPC and other relevant agencies to uncover the truth and serve justice to the people of Edo State who have suffered the double jeopardy of an incompetent and manically corrupt Governor.”
“The State Government must immediately publish all its dealings with Afrinvest Limited between 2016 and now, with details of all the contracts it awarded the firm, including cost, nature, and justification on why the firm, despite its established link to the Governor, was awarded the contract in violation of government rules on contract awarding process which frowns against nepotism and acts of state capture.”
“A full audit of the earnings of Afrinvest Limited between 2016 and now by a competent third-party auditing firm and the submission of its result to the ICPC and other relevant agencies to support its investigation into the petition filed against the Governor and the firm.”
“A full audit of the contracts awarded by the Edo State Government and their cost implication by a competent third party auditing firm, with the Governor stepping aside after directing all agencies of government to surrender all useful information and document to the auditing firm. The result of the auditing must also be submitted to the ICPC and other relevant agencies to aid the investigation.”
“The CBN must immediately stop any planned approval of the so-called PRIMUS BANK and surrender all information it has on those who sought the approval, the modalities presented, and the proposed bank’s source of its founding capital to the ICPC and other relevant agencies to support the investigation into the petition.”
“The Governor, Mr. Godwin Obaseki, must immediately address the press directly on the petition, stating his position on the record, and submitting himself to investigation to establish his innocence or guilt.”
The NGO says failure to meet these demands will leave it with no choice but to mobilize its members across the country and beyond for the “mother of all protests”, as it will not fold its hands and let an elected public officer feed his greed with state funds and leave the future generation with a society in chaos and a huge debt burden.
Please follow and like us:

“I am Not Your Father”, By Olusegun Adeniyi

3 soldiers killed, 2 others wounded, as troops of “Operation Whirl”...