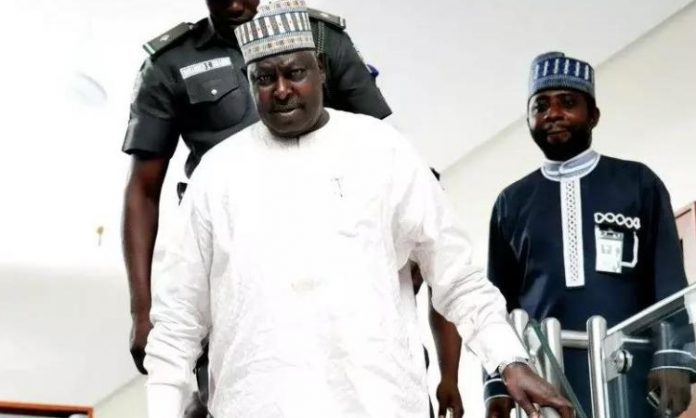 The Economic and Financial Crimes Commission, EFCC, on Monday, November 30, 2020, re-arraigned former Secretary to the Government of the Federation, Babachir Lawal before Justice Charles Agbaza of the Federal Capital Territory High Court, Jabi.

The defendants were docked on amended 10-count charge, bordering on diversion of funds, criminal conspiracy and official corruption to the tune of N544 million.

One of the charges read, “That you, Engineer Babachir David Lawal, while being the Secretary to the Government of the Federation (SGF) and a director of Rholavision Engineering Ltd on or about the 22nd August 2016 at Abuja, in the Abuja Judicial Division of the High Court of the Federal Capital Territory did knowingly hold indirectly private interest in the contract awarded to Josmon Technological Ltd but executed by Rholavision Engineering Ltd for the removal of invasive plant species and simplified irrigation to the tune of N258,132,735.99 only, by the office of the Secretary to the Government of the Federation (OSGF) though the Presidential Initiative for North East (PINE) and thereby committed an offence punishable under Section 12 of the Corrupt Practices and Other Related Offences Act, 2000.”

They all pleaded “not guilty” to the charges, upon which the defence team prayed the court to allow them to continue on the bail, earlier granted them by the late Justice Okeke, noting that the defendants have faithfully adhered to their bail terms.

Prosecution counsel, Offem Uket, made no objection, following which Justice Agbaza ruled in favour of the defence counsel’s prayer and adjourned the matter till January 20 and 21, 2021 for continuation of trial.

The defendants were initially arraigned before Justice Okeke on August 4, 2020, but following the judge’s demise, the case had to start afresh before Justice Agbaza.

JAMB may conduct second UTME due to registration challenges – Registrar