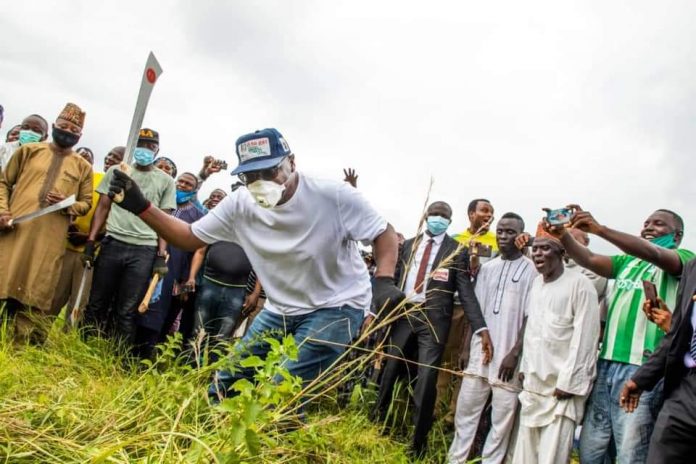 Kwara State Governor, AbdulRahman AbdulRazaq, at the weekend led in the cutting of grass at the Mount Carmel College in Ilorin ahead of statewide school resumption on Monday, saying his action was meant to inspire people to take responsibilities for government facilities located in their areas.

Clad in jeans, fez cap, shirt and his signature get-ready-for-work shoe, the Governor arrived the school with his cutlass alongside the House of Assembly Leader, Magaji Olawoyin, and Chairman of the state Environmental Task Force, AbdulRazaq Jiddah.

Together, they inspected the school, which was also partly affected by the recent rainstorm in many parts of Ilorin, the state capital.

“The message here is to emphasise self-helps and community contributions to public projects. When government locates a project in your community, community should take ownership.

“My being here is to send the signal that nobody is too big to be involved in community work; we need to help ourselves.

“It is really no big deal to make things work,” the Governor told community folks,” the governor said.

AbdulRazaq stated that a lot of community self-help projects and interventions were needed now more than ever as “government resources dry up amid global economic downturn and rising needs of the public.”

“There is scarcity of resources to go round. From the recent ecological disaster, it is clear that government can’t really cope in terms of funding. Communities should assist and join hands together, especially the parent teachers associations (PTAs).

“Everyone should cooperate with the government in order to keep the environment clean and mitigate environmental disaster,” he added.

“There is a lot of work to be done. Most of our schools are dilapidated and many have also been affected by the recent flooding and rainstorm.

“So, the message is self help and community work. The communities should take ownership of schools and adopt schools around them.”

He reiterated the efforts of the administration to reposition basic schools whose conditions he described as mostly appalling, citing the precarious condition of the Mount Carmel that is one of the most popular schools in the state capital.

According to him, “The neglect of schools is disgraceful and this justifies our commitment to invest in the schools. We will renovate and rebuild most of these schools because most of them are not about renovation.

“That is why the cost are coming high because we’re rebuilding some outrightly. With the help of Universal Basic Education Commission (UBEC), we will gradually put things back in shape.

“It would not stop at just that; we still need to train the teachers and give them the conducive environment to be able to teach.”

Mededem Jacinta, the Principal of the Mount Camel Junior Secondary School, who later joined the Governor, commended him for the unannounced visit to the school.

Again Presidency slams NEF, says it is “quasi-organization” with no credible...

Senate confirms Bawa as EFCC chair, tells him to “take a...

BUA Group says it has not increased price of cement

Nigerians deserve a police force they can trust -Gbajabiamila