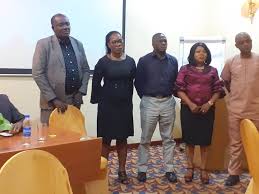 Oladipo, Publisher of The Eagle Online was returned unopposed as GOCOP President at the Guild’s annual general meeting on Thursday in Lagos through affirmation alongside other members of the executive committee elected in 2017.

Sequel to a unanimous view that the Oladipo-led executive committee performed creditably well, Horatius Egua, Publisher of The BridgeNews moved a motion to return the exco members unopposed and was seconded by Yinka Aderibigbe, Publisher of Sunrise.ng

The election of the new executive committee for another two-year term (2019 – 2021) was superintended by Ken Ugbechie, Publisher of The Economist and assisted by Akeem Oyetunji, Publisher of Prompt News Online.

The new executive will be sworn in on Friday, October 4, during the Third Annual Conference of GOCOP, holding at Sheraton Hotel, Ikeja, Lagos.

“You have brought honour, goodwill to Nigeria,” Buhari tells Jonathan at...