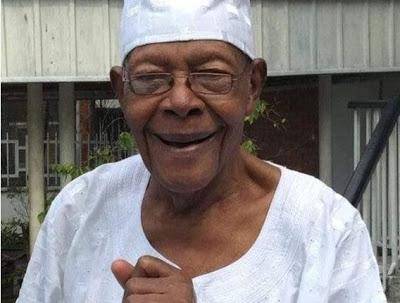 The Baba Eto of Lagos

The world has indeed lost a colossus, a man of integrity, a go-getter, a man of many parts, who served his state and his fatherland to the best of his ability. While some believe that Lagos State, Nigeria and Africa have lost a big fish, some are of the opinion that Elderman Folarin Coker is like a typical actor, who must have left the stage when the ovation was loudest.

A selfless man with a large heart, Chief Folarin Coker left his footprints on the sand of time and the name of Baba Eto of Lagos would continue to ring a bell in many generations to come.

Legendary Chief Nathaniel Coker was born on 22nd July, 1923 at 28 Joseph Street, Lagos, Nigeria to a Christian family. When it was time for him to find a life partner, Chief Folarin Coker got married to former Miss Larvinia Apinke Vanghan.

Baba Eto attended CMS Grammar School, Lagos from 1934-1941. The respected elder statesman later attended the University College of Exeter, England from 1948-1950 and Inns of Court, School of Law, from 1954-1957. Not done, the man with a knack for excellence was at Council of Legal Education, London and was called to the English Bar at Lincoln’s Inn, London on 12th July, 1960 and he was later admitted to the Inner Temple London.

Baba Eto subsequently got Senior Cambridge School Certificate, London with matriculation number 1941. After that, the man who would later become a force to reckon with among his contemporaries, obtained a Diploma in Public administration, (Exeter) in June, 1950, obtained Higher Standard Certificate, (Hausa), (Parts A  and B), (Administrative Class), Northern Nigeria, Public Service, Kano, 1954.

With the support of Almighty God and tenacity of purpose, Chief Coker sat for English Bar Finals, (Lincoln’s Inn, London) in May, 1957 and became Barrister-at-Law. The man of the people was later registered as Solicitor & Advocate, (Supreme Court of Nigeria), 1969 till death and appointed Notary Public (1978).

His sojourn in the civil service continued to soar higher as he became the Administrative Assistant 1951-1953 (Sokoto Province) Northern Region and Administrative Officer from 1953-1955 (A.D.O) (Kano), Northern Nigeria.

His job experience further propelled him to another ministry as he became the Permanent Secretary, Ministry of Sports and Social Development, Lagos State from 1975- March 1978 and retired at Statutory age of 55 years from the Public Service of Lagos State on 5th August, 1978. It is on record that Baba Eto became the Chairman of the Lagos State Manpower Development Board, Chairman, Board of Governors, Post-Primary Institutions Lagos State, (Lafiaji High School, Lagos).

Over the years, Chief Coker actively participated in several exercises and programmes for the development of Lagos State Civil Service among which are Seminar on the Civil Service in a Presidential System-May 1979, and introduction Course-General on the Role of Administrative/Professional Officer in the Civil Service-1982.

Some other notable services of the elder statesman were his participation in the Seminar on Revenue Generation from Land Transactions in Lagos State (Problems and Perspectives)- December, 1987 and Workshop on the implementation of the Civil Service Reforms in Lagos State-February, 1989. His experience also became useful as a Guest Speaker at the Lagos State Public Service Forum  in 1989 on the Topic: “The Civil Service and the 1992 Constitution -A Comparative Analysis.” Baba Eto further served as the Chairman of the Public Service Feedback Forum in July, 1990.

At the National level, Chief Coker was a member of the Board of Trustees National Sports Trust Fund, 1988 till death  and Pro-Chancellor and Chairman of Council of the Federal University of Port Harcourt, Rivers State from 1993-1997.

Baba Eto was also the Chairman of the Lagos Chapter of the Church of Nigeria (Anglican Communion) Trust Fund Committee. Altogether, put in a nutshell, Chief Folarin Coker was a steadfast Churchman.

His management acumen caused him to be awarded as a fellow of the Nigerian Institute of Management (Chris Abebe Merit Awardee), Member, World Scout Association), Trustee, Nigeria-India Association, and member of the Board of Trustees, Nigeria Biographical Foundation.

As a confirmation of the fact that Chief Coker was a man of many parts, he was made the Secretary of the Association of Lagos Titled Chiefs (1975-1989) and Chairman of Yoruba Tennis Club, 1988-1990, as well as “Elderman”-Island Club, Lagos.

Not a man to be left out where things are happening, he became the Chairman of the Lagos State Manpower Development Board, Chairman, Board of Governors, Post-Primary Institutions Lagos State, (Lafiaji High School, Lagos).

Chief Coker was an illustrious, devoted, committed and prominent old grammarian and senior prefect of the 1941 set of CMS Grammar School, Lagos. His contributions to the development of the Old Grammarians Society and CMS Grammar School are legendary and Iconic. The words and ideals of the great school song were obviously part of him.

It will be difficult to consign to the dungheap of history the worthy contributions of Elder-man Coker to the life of the School and OGS. In 2010, he inspired, conceived and donated the Bishop Seth Irunsewe Kale Memorial Tower Clock, a chiming Tower Clock, one of the firsts in designed style in black Africa and similar to the historic Big Ben Tower Clock in Central London, UK. It was customized to chime every one hour with the first stanza of the School Song as its signature tune.

When He turned 90 in 2013, as a veteran state swimmer, he initiated and bequeathed a Swimming Academy inclusive of State of the Art Olympic Size Swimming Pool. By that gesture, CMS Grammar School became the first and only legacy school in Nigeria to have a Swimming Academy.

Baba Eto was a kind, mild and generous genius. Even in his 90s, he never missed any Founder’s Day thanksgiving. Such was his passion for his alma mater. For his sterling contributions to the school and OGS, he was honoured with the OGS Distinguished Lifetime Achievement Award in 2015. He was simply a sensation!

Nevertheless, by His grace, the beam in the legacy He left behind will continue to burn brightly ever. If the world would get a replacement for Baba Eto, it might be difficult for such a replacement to have the candour, temperament, philanthropical and uncommon love for mankind that stood Baba Eto; Chief Nathanael Folarin Coker out in his generation

FOLORUNSHO FOLARIN – COKER (for the Family)

Omisore and the shape of things to come, By Kunle Oyatomi