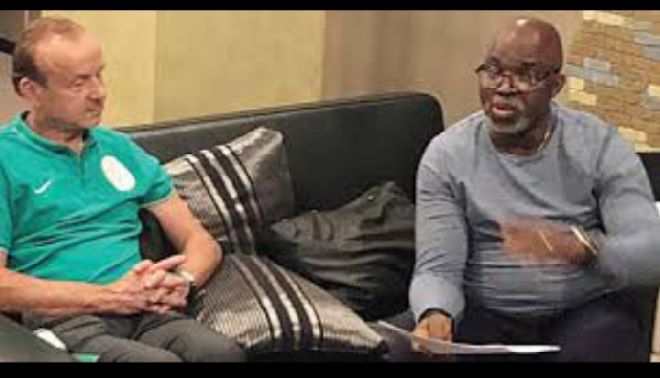 Mr Amaju Pinnick, President of Nigeria Football Federation, NFF, has assured that a fresh contract for Super Eagles coach Gernot Rohr will be ready in one week.
He however put a caveat that the contract will be renewed only if Rohr accepts the new terms of engagement.
The NFF Boss disclosed this while speaking on Arise TV ‘Morning Show’ this Monday morning.
According to him, the new terms inserted in his contract include that: he must live in Nigeria, be ready to be paid in Naira and watch league matches with a view to picking players that could be nurtured to become international stars.

“In one week, Rohr will get his contract, he should study his contract and come back to us. So, give and take, within seven days, he should have his contract.
“The only thing that can impede the contract is if he refuses some of our new clauses in the contract.
“He should live in Nigeria and go around to watch the league matches and see how to nurture the players.
“He has to be paid in Naira, we will pay him Naira equivalent of the dollars, we have to strengthen our currency. If he’s able to accept, we have a deal, ” Pinnick said.
PROMPT NEWS reports that the NFF President also assured Nigerians that getting a new coach won’t be a challenge should Rohr decline the terms, saying “I get calls everyday from coaches that want to come here.

Despite huge remittances by Nigerians abroad, impact low on economy —...