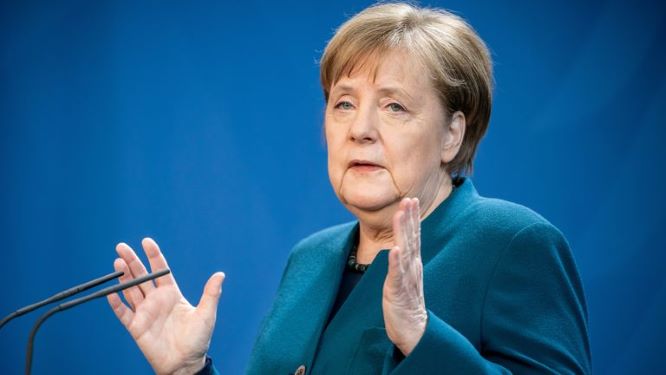 German Chancellor Angela Merkel is in quarantine after a doctor who gave her a vaccine tested positive for coronavirus.

Ms Merkel was informed about the doctor’s test shortly after holding a news briefing about new measures to curb the spread of the virus, her spokesman Steffen

It comes as Senator Rand Paul becomes the first US senator to confirm having caught COVID-19. Image:Senator Rand Paul is the first US Senator to confirm he has caught coronavirus
In a statement, Mr Seibert said Ms Merkel had received a precautionary vaccine Friday against pneumococcus, a pneumonia-causing bacteria.

He added the 65-year-old would work from home for the time being.

It was too soon for a conclusive test result, he said, but Ms Merkel would undergo “regular tests” in the coming days.

In the conference earlier on Sunday, the German chanceller announced a nationwide ban on public meetings of more than two people outside of work, to be in place for at least two weeks.

She ordered restaurants to offer takeaway only, adding that beauty, massage and tattoo industries must close.

The chanceller expressed gratitude to Germans who were following the social distancing rule of staying at least 1.5 metres apart.

“Thank you. I know it means making sacrifices, both personal and economic,” Ms Merkel said.

“I am very moved that so many people are obeying the rules. That’s how we show that we care for older people and the sick, for whom the virus is the most dangerous. In short, that’s how we save lives.

“The great aim is to gain time in the fight against the virus.”

Meanwhile, the office of US Senator Rand Paul confirmed in a statement that he has tested positive for coronavirus.

“Paul has no symptoms and was tested out of ‘abundance of caution’ given his recent travels,” the statement read.

The statement came as the US Senate prepared to take up a massive economic relief bill for the fight against the coronavirus pandemic, which is rapidly sweeping through the country.