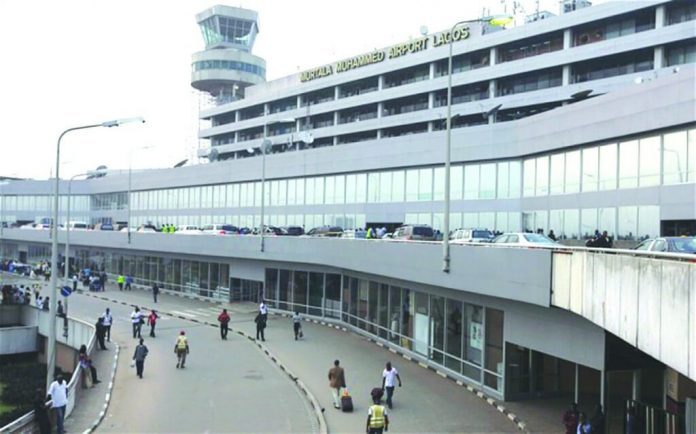 Amid pomp and ceremony, the first international flight landed at the Murtala Muhammed International Airport, Lagos, on Saturday, thus signaling the opening of the nation’s airspace.

This came about five months after the closure of the Nigerian airspace due to lockdown occasioned by the COVID-19 pandemic.

The aircraft operated by Middle East Airlines touched down at the Murtala Muhammed International Airport, Lagos, at exactly 02:27 pm.

Meanwhile, the News Agency of Nigeria (NAN) has provided further reports on the first international flighf to land in Lagos.

It said that the Middle East Airline (MEA) aircraft, which took off from Beirut, Lebanon, was ceremonially welcomed with a water cannon demonstration by the officials of the Aerodrome and Rescue Fire Fighters, a Department in the Federal Airports Authority of Nigeria (FAAN).

NAN also reports that officials of FAAN, Nigeria Immigration Service (NIS), Port Health Services (PHS), Nigeria Customs Service (NCS) and other relevant agencies were on ground to attend to the passengers brought in by the airline.

On arrival at the terminal, passengers presented their documents, including COVID-19 PCR test results for screening by the Port Health Services officials, while their travelling papers, passports and visas were handled by the immigration officials at the airport.

However, there was no much work to be done by the officials on ground as the aircraft landed with just 200 passengers as approved by the Presidential Task Force (PTF) on COVID-19.

The passengers, comprised Nigerians and foreigners, conducted themselves orderly and went through the protocols as approved by the PTF.

At the arrival and departure halls of the airports, the arriving and departing passengers observed the social distancing protocols, just as it was being currently observed on the domestic routes.

Speaking on the procedures, Mr Abdullahi Usman, Comptroller, NIS, MMIA, said the process was seamless and passengers were cooperative while travelling documents were requested from them by the officials.

Usman explained that on arrival, Nigerians onboard need not to fill another travel card, saying that when necessary; the immigration service would give them the right form to fill.

He said: “As you can see, the passengers are coming in quantum, not in a mass.

“The control of the passengers start from the disembarkation of the aircraft and you can see it yourself how orderly things were done.

“The procedures remain the same. Social distancing is there. Nigerians have no need to fill another card.

“Once we have any other information to get from them, we will give them another card. We want to ensure seamless passengers clearance at the counters.”

Lagos Govt advises residents not to panic over rise in food...