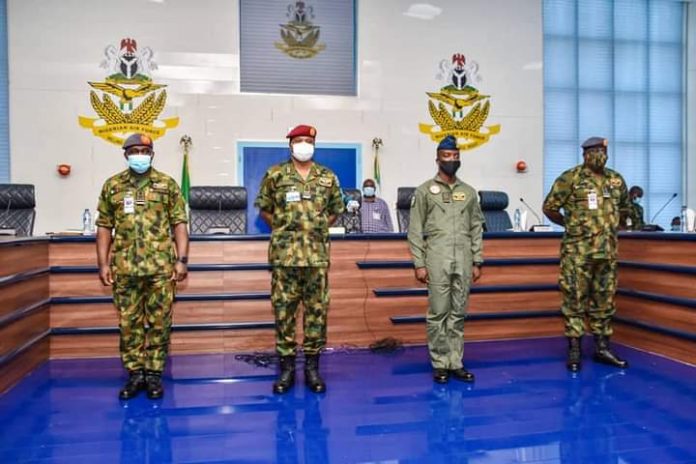 According to the Director of Public Relations and Information, Nigerian Air Force, Air Commodore Ibikunle Daramola, “the winging of the combat pilot is yet another milestone in the NAF’s capacity building initiative to meet emerging and contemporary security challenges in the Country.”

Speaking during the winging ceremony, the Chief of Air Staff (CAS), Air Marshal Sadique Abubakar, expressed delight to receive the young pilot back from India and congratulated him on his outstanding performance during the Courses.

The CAS emphasized that the NAF considered the human being as its most important resource and would therefore continue to invest heavily in equipping its personnel with the requisite skills to enable them be more effective and efficient in carrying out assigned tasks.

He revealed that about 200 NAF personnel were currently undergoing training in 9 different countries of the world including the United States of America, United Kingdom, France, Pakistan, China, Czech Republic and South Africa, among others.

Air Marshal Abubakar expressed his gratitude to the Commander-in-Chief of the Armed Forces, President Muhammadu Buhari, for his support to the NAF, which had not only enabled the acquisition of new platforms but also facilitated robust and result-oriented training for enhanced professional performance.

He reiterated the NAF’s resolve to sustain its human capacity development efforts, since the service remained a veritable instrument for the maintenance of national security.

The CAS charged the young officer to put in his best as “he joins his colleagues in the North East and North West Theatres to secure the nation.”

The newly-winged pilot, who is a member of the 64th Regular Course of the Nigerian Defence Academy, holds a Bachelor of Science Degree in Physics.

He had his initial flying training at 401 Flying Training School NAF Kaduna where he flew the Diamond DA-40 aircraft.

His training at the Indian Air Force comprised a total of 122 flying hours on the Chetak Helicopter.