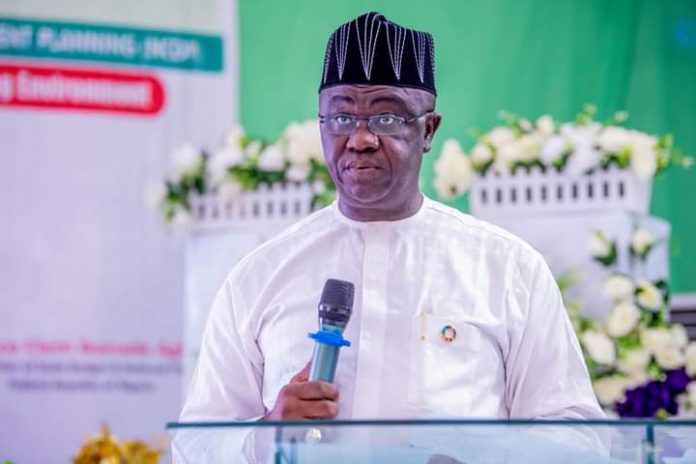 The Federal government plans to add at least US$150 billion to the nation’s foreign reserves cumulatively from non-oil exports over the next years.

Addressing a press conference on the forthcoming Nigerian Industrialisation Summit slated for Abuja from November 15 to 18, 2021, Agba said there were also plans to lift at least ten million Nigerians out of poverty and empower each state and the people by integrating them into the export value chain.

The minister who was represented by his Special Assistant on Budget and National Planning, Mr Sam Ekwueme, said,
“these efforts/Initiatives therefore, would unlock the potential of each State in the development and promotion of at least one crop for export.”

He disclosed that the Special-Industrial Processing Zones (SAPZs) an initiative of the African Development Bank (AfDB), was in line with Federal Government Policy to promote non-oil revenue generation and Zero-Oil Economy Plan, optimizing agro-value chain and continuous use of local content for economic prosperity at the national and sub-national levels.

The minister stated: “The Zero-Oil Economy Plan can now be sustained by the special Agro-Industrial Processing Zones (SAPZ) for the 36 states and FCT guaranteed by Federal Government of Nigeria and Non-Sovereign Organisation window NSO for the Private sectors, also by AfDB which Madewell Garment Limited, promoters of Jesse Export Processing Zones and Anchors is leveraging to drive the Private section of our economy.”

“The Private sector has capacity if pursued with desired commitment by the Public and Private Sectors to provide 25 million permanent employments and 25 million housing”, he added.

The minister explained that the planned Summit was one of the activities to create food security and diversify the Nigeria Economy.

“This aligns with this Administration’s drive on economic diversification, job creation and enhanced agro value chains, with the ultimate objective of lifting 100 million Nigerians out of poverty over 10 years.

“You may recall that this Administration has continued to place emphasis on the need for an aggressive economic diversification at the national and sub-national levels. Today’s spotlight is how Nigeria can feed, clothe and House itself.”

Harping on the objectives of the Summit, Agba said: “The SAPZ programme which is Centred on Commercial Agri-business will attract Foreign Direct Investment for Infrastructure Development such as Rail transformation to evacuate bulk raw materials from farm. Silos to processing Zones.

“Rail will also be storage used to move containers of finished cargo to port of shipment owing to massive employment housing provision becomes another key sector to be developed over the 10 years. The zones are expected to develop captive power plants along side, water, Health care, qualitative education system, hospitality and human capital development.

“We are also focusing on concentric diversification strategies especially in agriculture that can deliver sustained, job intensive and inclusive growth. This requires production and export of range of products for overseas markets to earn foreign exchange by unlocking agriculture value chain.

He pointed out that as a matter of deliberate government policy, the current Administration had taken several steps to increase our non-oil revenue generation, which include, VAT reforms in the Finance Act 2020 (maintaining the increase in VAT rate to 7.5%); Customs Administration Enhancement, Tax incentives and exemptions, increased remittances and recovery of unremitted revenues from GOEs, increased revenues from cross-border business transactions, unlocking value from FG assets that are lying idle or under-utilized among others.

According to the minister, these steps had helped to restructure the economy from being described as a mono-economy, depending on oil only to one that is relatively diversified adding that the ratio of non-oil to oil sector is 55% to 45%.

“Non- oil currently is contributing more than oil sector to National revenue. We have ensured a steady movement from 33 Sectors to 44 Sectors presently. Furthermore, the Agricultural sector now accounts for 25.08% of our nation’s GDP, the Trade sector is 16.86% of our GDP and the Real Estate sector 6.85%. These Sectors now dominate Nigeria’s economy.

“There was also a significant growth in Financial Services, Communications, and Entertainment sectors. The Oil and Gas industry’s contribution to the economy is approximately 8.86%. In realization of the need to grow the economy on an inclusive growth and sustainable economic development trajectory, my Ministry initiated the process for the preparation of a Medium Term National Development Plan 2021 – 2025 to guide Government policies, programmes and projects as well as private sector operations from now to 2025 while this would be inspired by Nigeria Agenda 2050 which encapsulates our long term vision for Nigeria,” he added.

Earlier in his remarks, the President of Development Bank, Dr Akinwumi Adesina commended the federal government’s plan to lift 100 million Nigerians out of poverty by 2030, even as he assured of the Bank’s commitment to help the government actualise its aim.

AfDB president who was represented by his Senior Special on Industrialisation, Prof Oyebanji Oyeyemi, noted that no nation has made remarkable progress, sustained growth, without industrialisation.

According to him, Nigeria is not an oil rich country, but oil dependent, adding that, “this is the cause of our present crisis. We should apply what other countries have done and succeeded.”