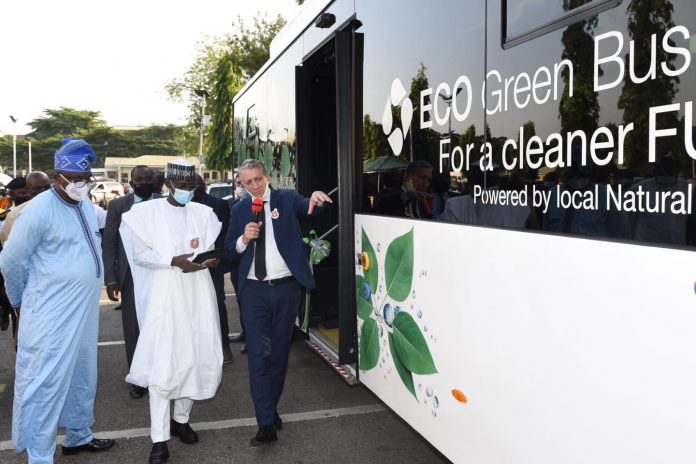 Minister of the Federal Capital Territory, Malam Muhammad Musa Bello, has reaffirmed the commitment of the FCT Administration to achieving zero carbon emission in the city by the year 2070.

According to a statement by the Minister’s Chief Press Secretary Anthony Ogunleye, the Minister gave this assurance in Abuja shortly after inspecting the mass transit “Eco Green bus” being proposed for use in the FCT by a natural gas powered vehicle manufacturer, Austrian Technologies Nigeria Ltd.

The Minister who restated that Abuja was conceptualized to be a green city by at least 40 percent, said, the FCT Administration was committed to the implementation of the pledge made by President Muhammadu Buhari at the COP26 meeting in Glasgow for Nigeria to achieve Net-Zero Carbon emission by 2070.

He also revealed that Abuja was part of a group of 6 nations from the northern and southern hemispheres committed to meeting the challenges of climate change and was also admitted as part of a research programme known as “Institute for Future cities” run by a university in the United Kingdom.

The minister said “Abuja, being a new city, we have a lot of the fundamentals to be able to achieve zero carbon emission and that’s why they admitted us and then we are going to work towards seeing how we can eliminate and become carbon emission free before 2070.”

Malam Bello indicated the readiness of the FCTA to look closely at the proposal from Austrian Technologies Nigeria Ltd in a bid to see the possibilities for deployment.

Earlier, while explaining the functionality of the proposed eco friendly mass transit bus, the Chief Executive Officer, of Austrian Technologies Nigeria Limited, Mr Johann Rieger said the buses were equipped with gas engines of higher emission standards (Euro 5) with no toxin, smog or smoke which guaranteed reduced noise and lower fuel costs and had the capacity to carry about 100 passengers in peak hours.

He added that the bus system also had other special features designed to reduce road fatalities, save fuel as well as reduce the cost of maintenance.

Mr Rieger also disclosed that his company planned to build a training school, using bus simulators that would allow drivers to be trained in a quiet classroom environment without burning fuel or blocking the roads while training.

The FCT Minister along with other staff members of the FCTA took a tour of the bus, asking relevant technical and financial questions.

Ortom to deliver lecture on “insecurity in Nigeria” as NUJ FCT...

Court sentences ex-Bauchi Accountant General to one year in prison for...

Dangote Refinery to sell refined crude to FG in naira –...