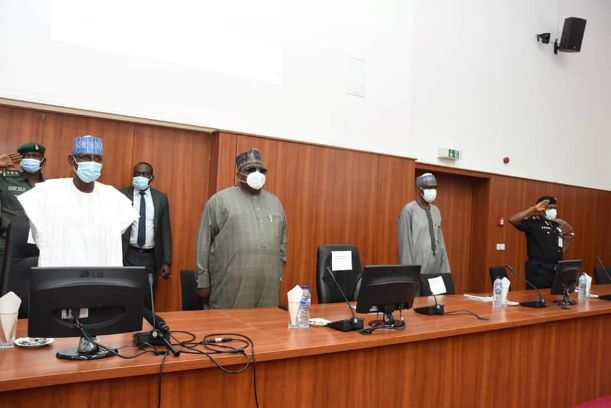 * Task members on winning the trust of communities

Minister of the Federal Capital Territory (FCT), Malam Muhammad Musa Bello, on Monday, inaugurated the FCT State Community Policing Advisory Committee (SCPAC) with a call on members to be guided by the principles of natural justice and the laws of Nigeria.

While inaugurating the 17-member committee headed by the FCT Commissioner of Police, Bala Ciroma, the Minister also urged members of the committee to be non-partisan in the discharge of their duties.

He also reminded them that the concept of community policing was anchored on a premise of trust between the people and security agents. A trust which, he said must not fall short if the objective of the policy is to be achieved.

He said, “Once there is a trust deficit in any guise or form, the workability of this policy becomes highly diminished and we would have lost a great opportunity in improving the security profile of the Territory”.

Malam Bello said those selected should be provided with basic training required for the job. He also advocated for a robust feedback and monitoring mechanism on the performance of those appointed to assigned tasks within the communities.

He also called for the confidentiality of investigations and protection of informants.

Giving an overview of the functions of State Community Policing Advisory Committees, the Assistant Inspector General of Police (Community Policing), Mr Bala Senchi said the SCPAC was the highest advisory body on community policy in a state.

The Inspector General of Police, IGP Mohammed Abubakar Adamu, who was represented by the Deputy Inspector General Police in charge of operations, Alh. Abdulmajid Ali said Community Policing will bring back communalism in the communities which he said had been lacking for a long time.

He also commended the FCT Administration for taking the laudable step of embracing community policing as a method of checking crime in the FCT.

Members of the FCT State Community Policing Advisory Committee are:

Police speak on deployment of personnel in APC National secretariat