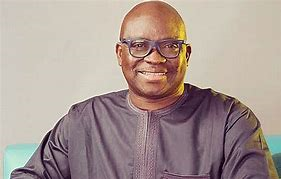 Former Governor of Ekiti State, Ayodele Fayose, stormed the Ekiti State House of Assembly on Friday, expressing his readiness to answer any question bordering on his tenure as governor of the State.

The House of Assembly had at its sitting of on Thursday summoned the former governor over what it called misappropriation of local government funds.

In an initial response on Thursday shortly after the sitting of the House through his media aide, Lere Olayinka, Fayose had said he won’t honour the invitation.

He said the House, using the instrumentality of Governor Kayode Fayemi, should invite the Economic and Financial Crimes Commission into the issue.

Fayose, however, stormed the House of Assembly at about 1:15pm on Friday.

He went straight to the office of the Speaker, Hon. Funminiyi Afuye.

The Speaker then invited other Principal Officers of the House, including the Deputy Speaker, Mojeed Jamiu.

Speaking to journalists at the House of Assembly, Fayose, who declared he was ready if the House was ready, said: “I’m a clear conscience, I fear no accusation.

“This is because I am one Nigerian who is not afraid of being asked questions and answering them.

“When the EFCC said they needed me, I made myself available to them at the exact time and day that I promised.

“To me, leadership is about responsibility and we as leaders must always demonstrate that we are responsible.”

“What is important is that my conscience is free.

“For me, I have done my bit, I will be available for any investigation.”

Meanwhile, as the former Governor left the House of Assembly, he was allegedly attacked by thugs in a government Toyota Hilux with black coloured doors and white coloured body.

The thugs, brandishing dangerous weapons like cutlasses and sticks, hit the vehicle convening the governor with sticks and attempted to block his convoy.

A statement by Olayinkla said one of the thugs was identified as Bidemi Genesis and it was gathered that they could have been alerted of Fayose’s presence by a Principal Officer of the House.

Nigeria must embrace all areas of technology – Onu

ActionAid to Nigerian government: Incorporate “Care” at the centre of economy,...