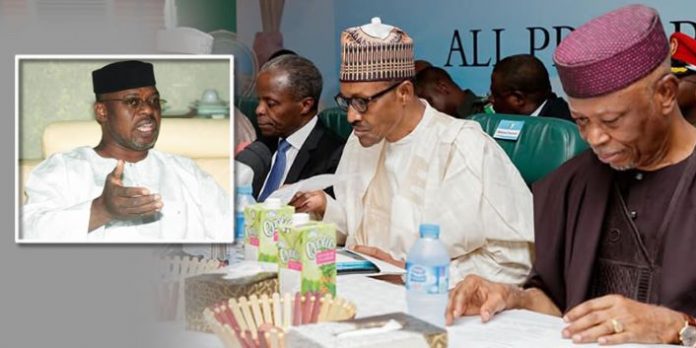 A chieftain of the Ekiti State Chapter of the Peoples Democratic Party (PDP), Femi Fakorede, says controversy is needless over the amendment made to Section 121 (3) of the 1999 Constitution by the 8th National Assembly granting financial autonomy to the state legislatures and judiciaries.
The former state lawmakers in a press reaction said “what appears to be a brewing controversy over the operationalisation of this novel constitutional provision by Executive Order 10 was dealt with twelve years ago in Ekiti State, during the administration of Chief Segun Oni.”
“Between 2007 and 2010 in Ekiti State, we implemented financial autonomy for the Legislative and Judicial arms in Ekiti State,” said Fakorede, who represented Ido-Osi constituency 1 on the platform of the PDP, between 2007 and 2011.
The Executive Order was recently issued by President Muhammadu Buhari to activate Section 121 (3) of the 1999 Constitution and give effect to the implementation of financial autonomy for state judiciaries and houses of assembly.
According to the former lawmaker, “I recall in 2008, that the House of Assembly, the Judiciary and, indeed, local governments were given the freedom of spending their budgeted monetary allocations from the state government.
‘Under the Oni administration, the Fiscal Responsibility Bill was passed by the State House of Assembly and signed into law along with the Ekiti State Public Procurement Act, 2010.
“The only caveat was that they must all follow the due process of law as the Executive arm of government was faithfully practising at that time.
“The fiscal autonomy implemented by the administration of Governor Segun Oni, is certainly not different from the new provision of Section 121 (3) and what the Federal government of Nigeria has just set out to do in the year 2020.
“I believe this may be the ultimate game-changer in the management of public finance at the subnational government for rapid development regardless of political partisanship, and it calls for no controversy.”
Fakorede said he decided to issue the statement because, “at the time, we did not see what Gov. Oni did concerning fiscal autonomy as a big deal until now, and I am also sure that this feeling is mutual with my former colleagues in the House, including those in the opposing former ACN, who are still around.
“That administration effortlessly instituted transparency and accountability, and it was the first of its kind in Ekiti State,” he added.
Please follow and like us:

NPHCDA says about 1.8 million Nigerians have been vaccinated against COVID-19

Coup in the Capitol Hill and the Divided States of America,...

Why I signed NOUN amended law, by President Buhari