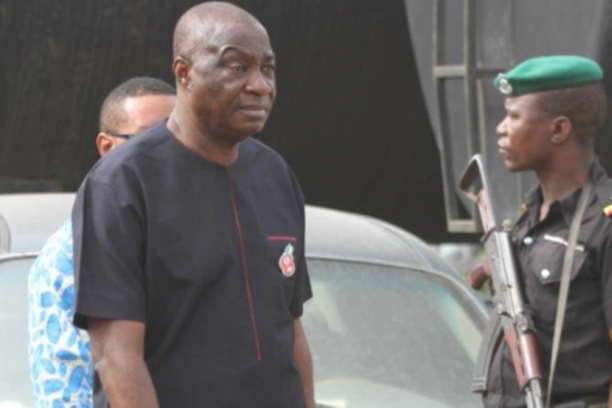 The convict was prosecuted on seven-count amended charges, bordering on criminal breach of trust and money laundering by the Economic and Financial Crimes Commission, EFCC, Lagos Zonal Office, following a 2015 intelligence report of fraud in NIMASA and subsequent investigations that unearthed several suspicious transactions to the tune of N1,699,808,666.60, traced to him.

One of the charges read: “That you, Captain Ezekiel Bala Agaba between the 23rd of December, 2013, and 13th of March, 2014 in Lagos, within the jurisdiction of this court, converted through Seabulk Offshore Operator Ltd, the sum of N437,726,666.60 (Four Hundred and Thirty-Seven Million, Seven Hundred and Twenty-Six Thousand, Six Hundred and Sixty-Six Naira, Sixty Kobo), property of the Nigerian Maritime Administration and Safety Agency, which sum you reasonably ought to have known forms part of the proceeds of your unlawful activity to wit: criminal breach of trust and thereby committed an offence contrary to Section 15(2) of the Money Laundering Prohibition Act, 2011 as amended and punishable under Section 15(3) of the same Act.”

He pleaded not guilty to the charges, upon arraignment, prompting his trial.

Prosecution counsel, Rotimi Oyedepo, in the course of the trial, argued that funds released by the Presidency through the Office of the National Security Adviser, for the International Ship and Port Facility Security, ISPS code activities in 2014, of which Agaba was its committee Chairman, was diverted by him through Seabulk Offshore Operator Ltd, Ace Prothesis Ltd, Southern Offshore Limited, Extreme Vertex Nigeria Ltd and Aroward Consulting Ltd.

“These companies were basically used to receive the funds and in most cases transfer the funds as directed by the defendant to various companies and individuals either for the purchase of United States Dollars or landed property or stock,” he said.

Oyedepo invited 12 witnesses and tendered several documentary evidences, which were admitted by the court as exhibits.

Delivering judgment on Wednesday, Justice Buba held that the prosecution proved its case against the accused beyond every reasonable doubt and sentenced the defendant to seven years imprisonment on each count, which is to run concurrently.

Tribunal: Erosion of professional ethics and due diligence caused collapse of...