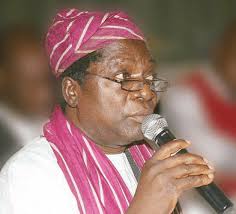 The astute and dogged labour leader also admonished trade unionists in the country to take the bull by the horn and redouble their efforts in engaging themselves actively in partisan politics so that a new and purposeful paradigm could be set for the country.

Akinlaja, an immediate past Chairman House of Representatives Committee on Petroleum Resources Downstream in the 8th Assembly dropped this striking hint when he presented a paper at a National Retreat organized by NLC in Enugu State
on Tuesday, October 23, 2019.

The 2019 NLC National Retreat came with the theme, “Trade Unions, Politics and Governance” .

“The Working Class and the Labour Movement must find a way to interject into this downward spiral that over-monetisation of politics has thrown Nigeria into. We must continue to push the frontiers of decency for which unionist are known and enthrone meritocracy in elections and appointments rather than mediocrity. We must continue to insist on the reduction in the cost of politics, elections and governance.

If we win these battles, then our beloved country Nigeria can take its long overdue space in the league of great democracies and developed nations.” Akinlaja said

While making comments on the formation of Labour Party, Zenith Labour Party and reflecting on his experiences during his sojourn into active politics, the former General Secretary of Nigeria Union of Petroleum and Natural Gas Workers (NUPENG) said,

“Although I have personally practised partisan politics with various parties in Lagos since 1978, the examples earlier cited of Labour-based political parties in other countries continued to inspire the Unionist in me that the formation of a Labour party could become a reality in Nigeria. However, year after year, Republic after Republic, and electoral cycle after electoral cycle, the dream began to look like a mirage. Why?

The reason is simple. I came to see that no group was more politically naive than our own. We of the workers’ class have always lacked something. We lack belief in ourselves and our ability to rule. We suffer from inferiority complex. We the workers and the Labour movement have a bigger presence than Nigeria’s supposedly largest political party in Africa, PDP. PDP falls behind NLC in size. NLC covers local government employees in 774 local governments. NLC has as members teachers in every village and hamlet. NLC has members who are civil servants, health workers, drivers, Okada commercial motorcycle riders and drivers in the transport union in every nook and cranny of our rural and urban spread. Yet we did not see ourselves capable of running a political party or winning political power.”

He continued, “We failed to leverage on Gani Fawehinmi who simplified the process for every one by going to court and getting rulings that no electoral agency has the constitutional power to register or reject any political association.

What the Nigerian Constitution allows the electoral agency to do is set guidelines for the formation of political associations, and whichever group satisfies these criteria will automatically get listed on the register as a duly-registered political party.

Thereafter, it behoves on the electorate to accept or reject the political party seeking power. It was a simple enough process. Yet Labour failed to take maximum advantage of the initiative.

We tried to register the Nigeria Labour Party in 1991, but General Ibrahim Babangida did not allow it to see the light of the day. Prior to that time our Labour and Socialist leader like comrade Wahab Gooodluck, Tunji Otegbeye, Micheal Imodu etc had attempted to form labour parties that could not stand the test of time. Instead, he gave Nigeria SDP and NRC, and General Sani Abacha came and buried both parties.

Finally, between 2001 and 2002, NLC and Civil Society leaders heeded the call and we founded the Party for Social Democracy (PSD), a truly Labour-based political party. The party had offices everywhere. The NLC National Secretariat in Abuja was designated its national headquarters. The Nigerian Union of Teachers provided offices in the states, while the National Union of Local Government Employees (NULGE) lent its offices in the councils. More Unions donated other facilities and resources too.

By the time Independent National Electoral Commission (INEC) carried out its verification exercise, the party had satisfactorily complied with the demands to have offices in 774 local governments, all the 36 state capitals and Abuja, a feat that several older parties found a herculean and sometimes impossible task. Our party had the full complement of officers down the levels.

The electoral commission had no choice but issue PSD the registration certificate to operate as a political party.

In 2005, NLC midwifed the choice of new leaders for the party. The new helmsmen would devote more time to the running of the party than we fulltime unionists. This resulted in a National Convention that effectively changed the name of the party to the Labour Party (LP) and the election of a new National Chairman, Chief Dan Nwanyanwun, who was former President of the National Union of Banks, Insurance and Financial Institutions Employees (NUBIFIE).”

Akinlaja in the course of his paper presentation disclosed;

“In preparation for the general elections, LP came up with good candidates like the former Deputy Governor of Lagos State, Otunba Femi Pedro, who flew our party’s flag in the 2007 governorship polls that Mr. Babatunde Raji Fashola went on to win.

In Ondo, I convinced Dr. Olusegun Mimiko to take the LP ticket and we achieved the unthinkable feat of defeating the then incumbent PDP Governor, Dr. Olusegun Agagu. I also went on to win my seat in the House of Representatives in 2011. Honourable Peter Akpatason, the former President of NUPENG, won in 2011 and joined me as an Honourable Member of the House of Representatives representing his constituency in Akoko Edo, Edo State.

Akpatason, the very strong labour activist came to the House of Representatives through the Action Congress of Nigeria (ACN).

In Edo State, the former NLC President, Comrade Adams Oshiomhole, won the Labour Party ticket. But later switched over to the Action Congress and finally became the Executive Governor of Edo State in 2008.

Oshiomhole went on to win a second term in 2012. Today, Oshiomhole is National Chairman of the ruling APC, but he remains a Labour man to the core. These are all success stories recorded when Labour took the gauntlet to join politics actively.

Today, by omission or by commission, we have two duly registered parties in Nigeria tracing their roots and histories to the Labour movement. One is the Labour Party (LP), led by Abdulkadir Abdulsallam and the other, the Zenith Labour Party (ZLP), led by Dan Nwanyanwu. We hope we can create the atmosphere to bring both of them together in the nearest future.”

Speaking on the challenges of the Unionists in politics, Akinlaja maintained that;

“Labour has all it takes to dominate the political space. Structurally speaking, Labour is not only the country’s largest institution, it is the most organised and therefore the most formidable. Labour has the widest spread and network. The major challenge in unionists embracing politics and becoming politicians comes from their inability to muster the necessary convergence of opinion and unity of purpose to get members to transform to politicians in political parties. We just lack the political will. Workers lack cohesion and cooperation. And that remains a major issue.

Another hurdle to cross has to do with funding. Finance poses its own unique challenge. Whether we like it or not, we must acknowledge that in the evolution of Nigerian politics, there has emerged a species of politics and politicking heavily influenced and controlled by astronomical monetisation. Contemporary politics is financially demanding of participants. That is the daunting reality confronting the country and those playing politics in the country.

Politics is not for shallow-pockets. Gone are the days of the First Republic and the Second Republic when people personally volunteered or got dragged into politics by the community to represent their people selflessly with little or no cost to the aspirant.

Conversely, contemporary Nigerian politics saddles the aspirant, the candidate and the political party with gargantuan bills, formally and informally.

No sooner does an aspirant declare his intention to run for office than people in his immediate constituency turn him into an ATM that must dispense cash for their financial needs, be it for christening ceremonies, for burial ceremonies, for hospital bills, for school fees, for transportation expenses or even for feeding.

Against this background, people now see politics as business and party funding as a function of best return on investment. This enthrones the moneybag politician as king. This will have the unhealthy implication that selection of candidates will favour wrong people, which will bring misfits into power. Going forward, this sort of moneybag politics will ruin our vision of Nigeria as a true democracy.

Today, can we honestly claim that we are running a government of the people, by the people, for the people?
Heavy monetisation of politics gives room for POCKETISM. I coined POCKETISM to denote a situation whereby sponsors of parties and politicians concern themselves with the question, “What is in it for us and for our pockets?” POCKETISM leads to PATERNALISM. Paternalism leads to underdevelopment. Paternalism makes the moneybag to behave like parents. After all, whoever pays the piper dictates the tune. POCKETISM IS THE DIRECT OPPOSITE TO PATRIOTISM.”

He stated further that the failure of the political elites to turn the tide in politics has led to many social vices and defiant behaviours in our youths.

“…This phenomenon endangers and will continue to endanger the socio-political and socio-economic growth of Nigeria. Money that would have gone into development of facilities and infrastructure go into private pockets. Without gainsaying, corruption will rule and the country will suffer. Public fund gets pilfered by elected public officers and public servants who flagrantly flaunt their materialism in the face of the public. This set of politicians and elites poses a danger to themselves too. They forget that prowling kidnappers and assassins can swoop on them and their families.

This presents the nation with an emergency that needs rapid solution. If not, we may find ourselves overwhelmed by kidnappers, insurgents and cultists. And with all we see, the countdown to doomsday may just have begun.” He explained

Barcelona crash out of Champions League, drop to Europa

Confusion in NSCDC as Presidency drags feet over appointment of new...