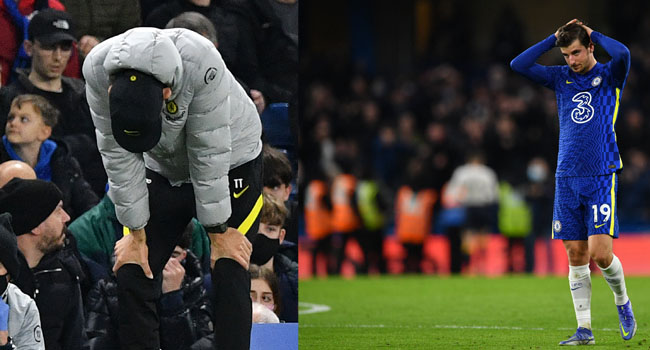 Chelsea’s Premier League title challenge suffered a major setback as Everton snatched a 1-1 draw just hours after four of the European champions’ stars tested positive for the coronavirus on Thursday.

Thomas Tuchel’s side were without Romelu Lukaku, Timo Werner and Callum Hudson-Odoi after the latest Covid-19 outbreak to rock the Premier League.

Ben Chilwell, currently injured, also tested positive, while Kai Havertz was unable to play after feeling ill before the match. 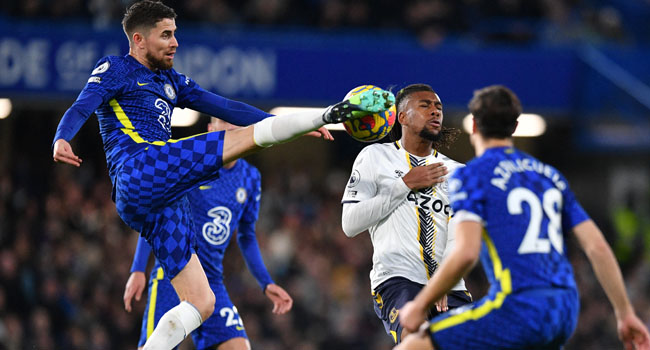 The Blues were already without Mateo Kovacic as the Croatia midfielder recovers having contracted the virus earlier in December.

Shorn of so many key players, Chelsea laboured to break down stubborn Everton until Mason Mount netted midway through the second half at Stamford Bridge.

Despite dominating from start to finish, Chelsea were punished for switching off at the back when Jarrad Branthwaite grabbed Everton’s equaliser with 16 minutes left.

It was the 19-year-old defender’s first goal for Everton in just his third Premier League start.

Failing to beat a struggling Everton side decimated by injuries and illness was a hammer blow on a difficult day for Chelsea.

Chelsea have won only two of their last five league games as they lost ground on City and second placed Liverpool.

With five games scheduled for this weekend called off due to Covid cases, and four others postponed at various times in the last week, Tuchel insisted he did not push for Chelsea’s game to be cancelled.

“I don’t lose any concentration or energy with questions like this,” he said.

“At some point it’s getting difficult in terms of overuse of players, but I was not involved in these thoughts.”

The battling draw was a welcome sight for under-fire Everton boss Rafael Benitez, whose team have won only one of their last 11 league games.

A banner reading “Benitez – get out of our club” was unfurled by Everton fans before kick-off.

But it was the Chelsea supporters who were booing at full-time after their side’s latest frustrating result.

Reece James should have put Chelsea ahead in the opening minutes, but the defender blasted over after sprinting onto Jorginho’s pass.

Jordan Pickford repelled James’ free-kick before Mount had a golden opportunity to reward Chelsea’s blistering start.
Mount collected Antonio Rudiger’s pass six yards from goal, yet once again Pickford came to Everton’s rescue as he saved with his out-stretched foot.

Chelsea finished the half with 81 percent of the possession and it was a similar story after the interval.

Mount’s deflected effort was clawed to safety by the over-worked Pickford, who breathed a sigh of relief when Ruben Loftus-Cheek glanced the resulting corner over from close range.

He sent on Ross Barkley and Saul Niguez for Alonso and Loftus-Cheek and the changes reaped an immediate reward in the 70th minute.

In a flash, Barkley found James and he slipped a deft pass to Mount, who timed his run into the area perfectly before planting a composed finish past Pickford at the near post.

The 22-year-old’s seventh goal this season was his fourth in his last four Premier League appearances.

That should have been the spark for Chelsea to finish the job but a lapse in concentration allowed Everton to equalise against the run of play four minutes later.

Anthony Gordon’s free-kick looped towards the far post and Branthwaite sneaked in behind the dozing Chelsea defence to poke home from close range.