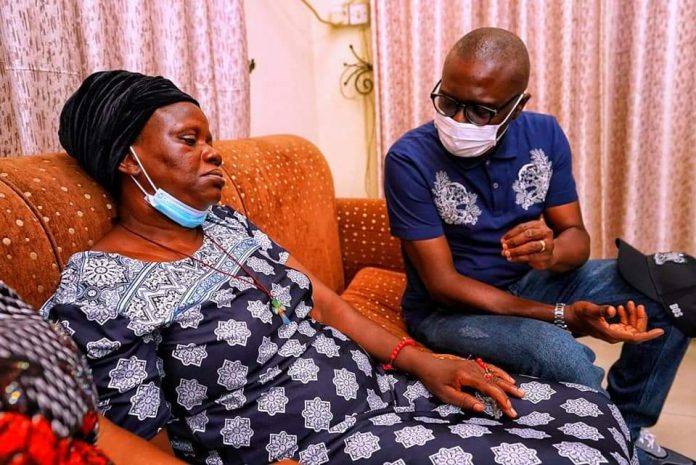 ▪︎Says the deceased won’t die in vain
▪︎Witness relives how Iloamuazor was hit by stray bullet
Lagos State Governor, Mr Babajide Sanwo-Olu, on Saturday, visited the widow of the driver hit by stray bullet during last Monday’s demonstration by youths in Surulere for the dissolution of the Special Anti-Robbery Squad (SARS).
The protest ended bloody when the police attempted to disperse some of the protesters who were moving towards Anti-Cultism Police Command in the area. 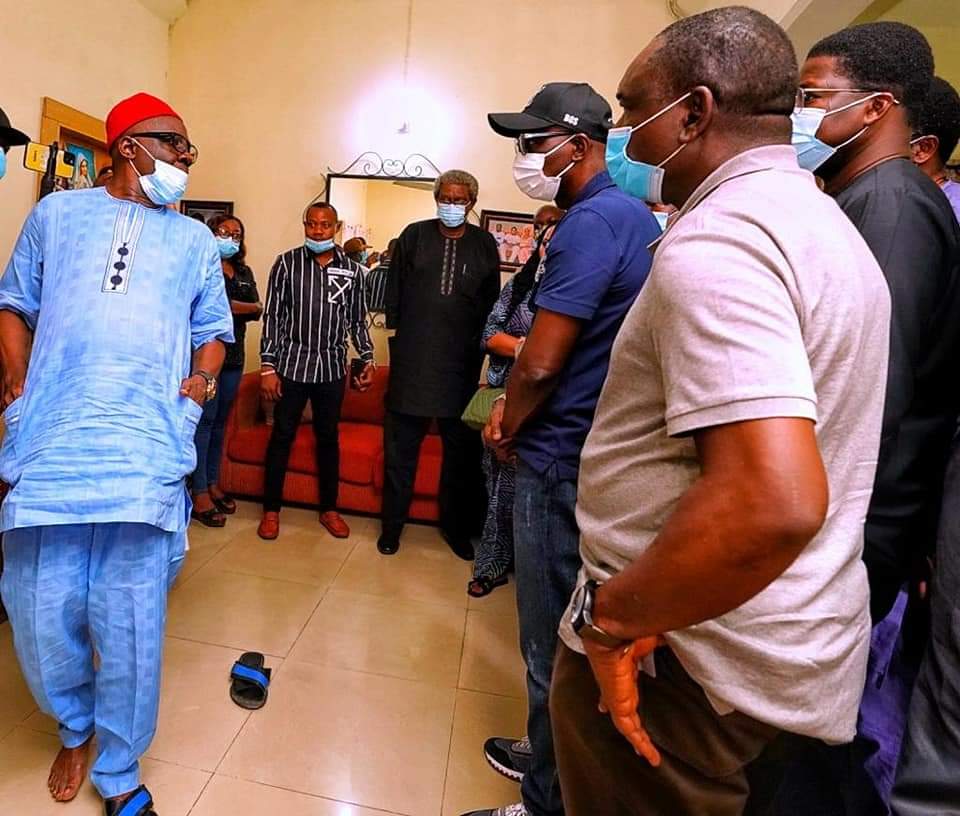 In the ensuing chaos, Mr Okechukwu Iloamuazor, 55, was hit by bullet and died on the spot.
A policeman, Inspector Ayodeji Erinfolami, also died in the incident.
Number 30, Federal Road, Railway Compound in Ebute Metta – the family house of the slain driver- was enveloped in gloom when Sanwo-Olu visited his grief-stricken widow, Mrs Ngozi Iloamuazor.
The Governor arrived at the deceased’s house at 2pm; and, he was received by family members led by their head, Barrister Bede Enewally.
Sanwo-Olu commiserated with the family over the incident, which he described as unfortunate.
He said the late Iloamuazor should not have died under the circumstance, but assured the family members that the perpetrators would be brought to book.
Already, all the four policemen who opened fire on the protesters in Surulere had been identified by the Government and the police authorities.
They are currently undergoing orderly room trial at the Lagos State Police Command.
But, Sanwo-Olu said the State Government would take the officers’ punishment beyond the established disciplinary guidelines of the police.
He said: “On behalf of the State Government, and the people of Lagos, I commiserate with the family over this mindless brutality that led to the death of your son. We condemn endless killing of innocent citizens to the highest level. It is highly disheartening to learn that the victim, Mr Iloamuazor, was performing his legitimate duty when the unfortunate incident happened. He hurt no one to have been subjected to such painful death.
“The officers involved are undergoing orderly room trial as we speak, but we will allow the police complete their investigation. We will certainly take the case out of the police and bring the full wrath of the law on the officers who perpetrated this irresponsible act. This will be clear signal for other trigger-happy officers.
“Mr Iloamuazor’s death is a sad loss not only for the family but also to the entire citizenry that has clamoured for an end to police brutality. I assure you that his death won’t be in vain and the case will not be swept under the carpet. This is going to be the beginning of real change that people want to see in law enforcement.”
Sanwo-Olu reiterated that his administration remained on the side of those calling for change in policing method.
He said all those maimed or killed in Lagos in the course of the demonstration would be duly compensated, adding that the State Government would honour their sacrifices by pushing for reforms that would bring about a policing system that will uphold rights of the citizens.
He said: “As a Government, we have stood on the side of the protesters and we totally believe their agitation is legitimate. We need total reform in the policing system and it is a clarion call on all of us, who are exercising powers on behalf of the citizens.”
The late Mr Iloamuazor’s boss, Chief Sam Okafor, who witnessed how the driver got hit by stray bullet, relived the incident.
Okafor cleared the air that the deceased was not partaking in the protest, pointing out they were both heading to Ilupeju when they ran into the protesters in Surulere.
“We were stuck in the traffic caused by the protesters who were shouting EndSARS. For more than 40 minutes, there was no movement. I wound down the windshield for fresh air, while Iloamuazor got down from the car to stretch his body. After stretching, he put his both hands into his pockets and trying to figure out where the traffic started.
He said: “Suddenly we heard gunshot three times. The next thing I saw was Iloamuazor falling from his position. His hands remained in his pockets as he fell. I ran out of the car and screamed for help. People came and started performing all sort of things to save him. The police came to the scene and I told them my driver had been shot on the spot.”
Okafor urged the Governor to ensure justice was served in the matter, noting that he was yet to be relieved of the shock.
Enewally said Iloamuazor’s death threw the family into a state of perpetual sorrow, noting that the deceased carried several responsibilities in the family.
He said the family put its trust in the Governor to ensure justice was served at the end of the day.
Please follow and like us:

Jonathan calls for unity in fight against COVID-19

Senate queries DPR for remitting only N44.5bn out of N2.4trn generated