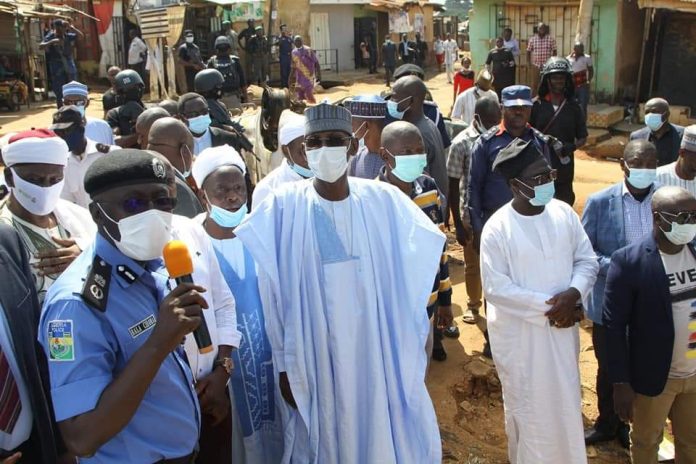 Bello and the Minister of State, Dr Ramatu Tijjani Aliyu, led an entourage of political, religious, community and traditional leaders on an assessment tour of locations within the FCT where #EndSARS unrests occurred recently.

Members of the entourage, which visited scenes of the unrest at Apo/Waru, Kabusa Junction in AMAC and Dutsen Makaranta in Bwari Area Council included the Senator representing the FCT, Phillip Aduda, House of Representative member, representing AMAC/Bwari, Micah Jiba, Permanent Secretary of the FCTA, Mr Olusade Adesola, and the FCT Commissioner of Police, Bala Ciroma.

While speaking to traders at the Kabusa Junction and Apo/Waru areas, Bello commiserated with them for their losses and assured them that the FCTA would assess the extent of their losses and work towards appropriate compensation.

He said “For those that have been encountered with destruction of their property, by the grace of God, the FCT Administration will ensure that all that needs to be done to ensure that you get adequately compensated will be done.”

The Minister also said that the FCT Administration would do all that it would take to ensure that peace and harmonious co-existence were maintained in the FCT and assured them of the administration’s determination to protect life and property.

He also appealed to them not to allow external influences to destroy the peace that had been built and maintained over the years.

His words “All of us have come here to earn a living, to find what we can do to maintain ourselves and family and I assure you that the FCT Administration will continue to ensure that your lives are protected, your properties are protected and above all, you have a correct environment for you to earn your livelihood.”

While speaking in the same vein, the Minister of State, Dr Ramatu Tijjani Aliyu reminded those gathered that they were indeed brothers and sisters regardless of ethnic or religious affiliations.

She also called for calmness on the streets, reminding all that if the protests were for the betterment of Nigeria, then violence was quite unnecessary.

At Dutsen Makaranta where a customary court and police outpost were destroyed, the Minister of State said “We feel your pain. This is a court established to give justice to the people. We will be wondering what it has got to do with the protests and property being vandalized.

“This goes a long way to tell us that it’s just the work of miscreants or hoodlums targeted at government facilities.”

Speaking to reporters after the tour, the FCT Minister, Bello, said that residents needed to work together and commit themselves to peaceful and harmonious living.

While confirming that some arrests had been made by the police over the unrest, Malam Bello urged residents to volunteer information to the relevant authorities to ensure that appropriate measures were taken.

He also expressed satisfaction with the level of cooperation the administration had received from all stakeholders and called on all to “allow reason to prevail and not to allow a few people that came in under the guise of ENDSARS to really bring disharmony to our city.”

The FCT Ministers and their entourage were well received and community leaders who spoke also committed themselves to peace and denied any involvement in the #ENDSARS protests, declaring their support for the Federal Government and the FCT Administration.

Delta to upgrade Asaba Airport to category 9 as United Airline...

US Executes First Female Inmate Since 1953