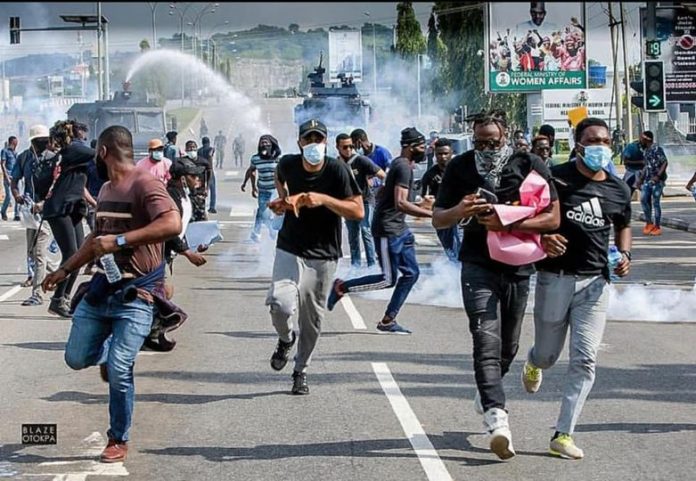 Human and vehicular traffic were grounded on Saturday on major road’s in Nsukka town, in Nsukka Local Government Area of Enugu State, as a result of  the #EndSARS protest.
The large number of protesters converged at the Union Primary School Nsukka, as early as 10 am, and went through Nsukka Barracks to Achara,  Aku, Enugu road among others.
Speaking to newsmen, one of the protesters, Mr Chidi Onah a lawyer and human rights activist said youths in the Nsukka senatorial district, also joined their counterparts nationwide to support the #EndSARS campaign, end to police brutality, as well as calling on the Federal Government to totally reform the Nigerian police.
“Today, youth’s in Nsukka senatorial district are joining their counterparts in different parts of the country to support the #EndSARS protest and police brutality in the country.
“The protest is also calling on government to totally reform the Nigeria police force to enable them to perform better and respect citizen’s human rights,”he said.
Also speaking, Mozzie Michael,  a former President of  Rotaract Club in the University of Nigeria Nsukka, said the request of Nigerian youths  were simply, for the Federal Government to #EndSARS, curb police brutality as well as total reformation of Nigerian police.
“The number of youths participating in the nationwide #EndSARS protests and police brutality is an indication that police brutality has touched almost all families in Nigeria,”he said.
While Addressing the protesters at the Nsukka Area Command, Mr Abraham Gyenger, the Divisional Crime Officer ( DCO), commended the youth’s for being peaceful in their protest and urged them to “keep it up”.
Gyenger said the police provided security for protesters to ensure that hoodlums did not hijack the peaceful protest.
” I am addressing you as the most senior police officer, because the Nsukka Area Commander, his  second in command and the Nsukka Urban DPO are not in the office,”he said.
Also addressing the protesters at Adada House Nsukka, Mr Cosmas Ugwueze, the Council Chairman of Nsukka Local Government, commended the protesters for conducting the protest in a peaceful manner and urged them to remain peaceful.
“We are in support of  your protest that is targeted towards making the country a better place for all Nigerians,” he said.
NAN
Please follow and like us: