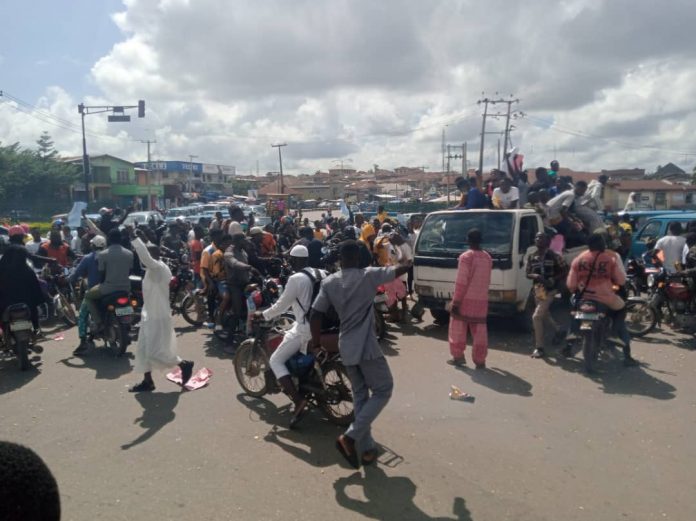 Nigerian youths today (Friday) protested against brutality and extra-judicial killings by operatives of the Special Anti-Robbery Squad (SARS) unit of the Police.

The protesters stormed the popular Olaiya junction in Osogbo, Osun state capital, with placards inscribed with #Endsars, “Nigeria police stop killing us”, and “say no to brutal injustice”, “stop killing Nigerian Youths”, “we are not animal, stop killing us”, among others.

The demonstrators, a majority of whom are young men and ladies, after they have succeeded in grounding popular Olaiya junction for about 40 minutes, proceeded to State Government Secretariat, Abere where vehicular movement was obstructed for more than thirty minutes.

The protesters, numbering about four hundred, insisted that they were not going to leave the Secretariat unless they were attended to by any Government official or the governor himself.

The protesters were seeking the dissolution of the SARS unit of the Nigeria Police Force over cases of killings, harassment and extortion by its personnel.

Speaking with The Conclave, one of the protesters, Gbenga Olaleye, called on the Inspector General of Police, Muhammed Adsmu, to, as a matter of urgency, proscribe the operatives of the SARS, saying they would continue to stage the protest to press home their demand.

Olalaye said: “We are here to let our intention to be known that we do not want SARS anymore.

“They come with all sort of stories about reform what they are allowed and what they are not allowed to do but it is about time to completely abolish SARS, that is why we are here.

“I urge the government to rise to the occasion and nip this monstrosity in the bud with the seriousness it deserves.

“It’s expedient that the activities of SARS are reviewed to ensure that the rogue elements are excused from the unit and sanity returned to its operations.

“Just about three weeks ago, we all know what happened in Osogbo here where promising youth of the country was chased to death. Should we continue to watch them kill us? No! We are the future of this country and they should stop killing us.”

These extrajudicial activities of the anticrime squad have also been condemned by celebrities and politicians who have also called for a total scrapping of the police unit.

Nigerian youths, mostly affected by the brutality, have for several times trended the call for the scrapping of SARS with many sharing their experiences on Twitter.

NMA pleads with FG to respond to doctors’ needs