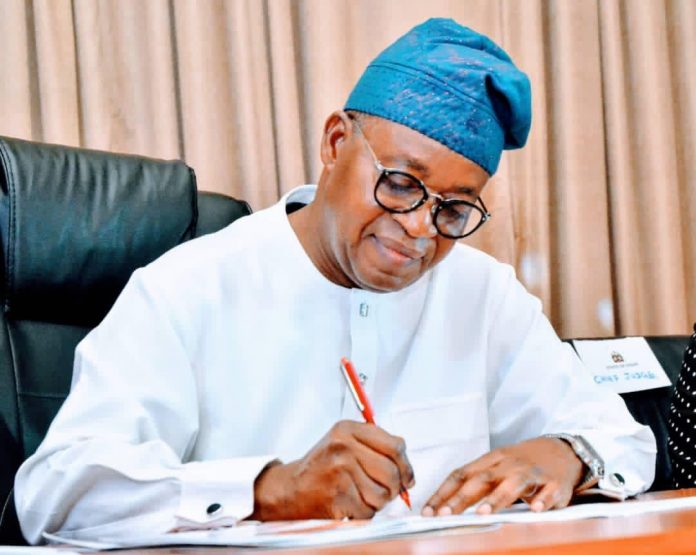 By Richard Akintade, Osogbo
The Osun State Governor, Mr Adegboyega Oyetola, on Thursday, inaugurated a judicial panel of inquiry to look into cases of assault, illegal arrests, killings, brutality and other forms of rights abuse by the officers and men of the disbanded Special Anti-Robbery Squad of the Nigerian Police.
Oyetola said the panel would also look into the death of two persons at two different locations last Saturday.
The 12-man panel, which would be chaired by Hon. Justice Akin Oladimeji, a retired Judge of the High Court also has as members Prof. Wasiu Oyedokun (Civil Society Organisation), Comrade Ismail Abdul Aziz (Chairman Osun Chapter of the National Youth Council of Nigeria), Prof. Grace Akinola (from the academia), Biodun Layonu, SAN, Abayomi Ogundele Esq. (Osun Coordinator, National Human Rights Commission), Mr. Jide Akano (Rtd. DIG. of Police), Mr. Jumoke Ogunkeyede (Social Activist), Teslim Salaudeen (Student, NAOSS President), Comrade Oluwasegun Idowu (Civil Society Organisation),  Abdulrahman Okunade (NBA Chairman, Osogbo Branch), and Mrs. Kemi Bello (Representing Ministry of Justice, Osun) as Secretary to the Panel.
Oyetola, speaking at the inauguration, said that the setting up of the Judicial Panel of Inquiry was in keeping with Section 2:1 of the Commission of Inquiry Law Cap 29, Laws of Sate of Osun 2002 and in line with the directive of the Federal Government to all the 36 Governors of the State and the Minister of the Federal Capital Territory.
According to Oyetola: “Recall that last Saturday while addressing the protesters at Olaiya, I did promise that this Panel would be inaugurated this week. I thank God I am alive to carry on with this inauguration. But for providence, I probably would not have been alive to perform this function today following the attempt on my life at that event.
“As a responsible government, we are resolved to get to the root of these excesses with a view to getting justice for the victims and the families of the deceased and making our people to exercise their rights without let or hindrance.
“To achieve this objective, we have assembled distinguished sons and daughters of Osun drawn from the Civil Society Organisations, academia, students’ union, youth organisations and the legal profession, whose impeccable character, experience and antecedents match our quest for justice for the oppressed.”
Speaking on the terms of reference of the panel, Oyetola stated that the panel would: “Receive and investigate complaints of Police brutality, human rights violations and related extra judicial killings; Evaluate evidence presented/other surrounding circumstances, and draw conclusions as to the validity of the complaints.
“Recommend indicted police officers involved in brutality to the Police Authorities for appropriate discipline and prosecution as appropriate; Recommend compensation and other remedial measures, where appropriate, to appease the victims of police brutality.
“Investigate the violent attack carried out against Mr. Governor and his entourage at Olaiya roundabout on 17th October, 2020 and make appropriate recommendations.”
Oyetola charged the members of the panel to approach the sacred duty entrusted to them with responsibility, adding that their recommendations and outcomes are needed to instil confidence in the enraged youths and earn the government trust.
“I must let the chairman and members of this Judicial Panel of Inquiry know that they are being called to this sacred duty at a time the status of the State as a peaceful one is being challenged and at a time their recommendations and outcomes are needed to instil confidence in the enraged youths and trust in our government.
“It is therefore incumbent on the Members of the Panel to approach this assignment with the highest sense of responsibility, fairness and integrity so that justice will not only have been done but would have been seen to have been done,” Oyetola added.
Oyetola further appealed to the citizens and the genuine protesters against police brutality to give the government a chance to run the process through by suspending their street protests, adding that the suspension will help the security operatives to rid the State of miscreants who have hijacked the protest for other pecuniary gains.
Please follow and like us: