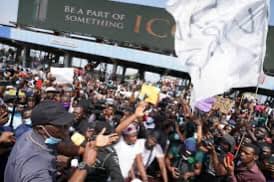 The Prelate of Methodist Church of Nigeria, Dr Samuel Uche on Sunday advised  “ENDSARS’’ protesters to disperse and be patient as the Federal Government is making effort to meet their demands.

The prelate gave the advice in an interview with newsmen after the ordination service held for 20 priests and deaconess at the Methodists Cathedral of Unity, Wuse, Abuja.

Uche wondered why the youths were still on the streets protesting, saying that the government had started addressing their requests.

“ I want to advise all the youths to please leave the roads and go home.

“If anybody has sent them to cause disorder, they should say no to that person and allow this government to perform.

“Government has been very magnanimous to appeal to them that they will take care of their requests.

“Why are they still protesting? There is more to the protest than meet the eyes. Let them sheath their sword.

“I am saying they should not trouble this democratically elected government,’’ the prelate said.

He further advised them not to give room to unpatriotic elements to cash in on the protest to disabilise the government and country at large.

Uche, however, empathised with the youth, saying that they resoled to embark on the action as many of them have no job.

“They are children, I pity them, some of them do not have jobs.’’

He called on government at all levels, Federal, state and local, as well as entrepreneurs to create jobs for the youth.

According to him, the country is presently being faced with a number of  challenges and stressed the need for Nigerians to be patient with the government.

On the disbanded SARS, the prelate said that he supported the action but advised that another squad or unit should be created to replace it.

This, he said was necessary to address current insecurity in the country.

He said that although the Nigeria Police were doing a good and noble job, there were “bags eggs’’ among them, especially the disbanded SARS.

“The police are doing a good job in Nigeria, but they have allowed some bag eggs to enter into their midst.

“They – police are important. They should have a sort of re-orientation and continue with their noble work of protecting lives and property.

“All those bad eggs should be removed, those who have killed or attacked people unjustly should be disciplined. Some of them should be dismissed,’’ he said.

He urged the Federal Government to improve the welfare of the police and other security agencies in the country, and equip them so they could discharge their responsibilities effectively.

On the newly ordained priests and deaconess, Uche advised them to go out and win souls for Christ and not seek to amass wealth.

“The most important thing is to seek first God’s kingdom and righteousness and other things will be added.

The prelate prayed God to grant wisdom to those in positions of authorities to govern the nation well.

Amendment of NB Code By Lai Mohammed is illegal – NBC...