▪︎Offer food, ask others to join in 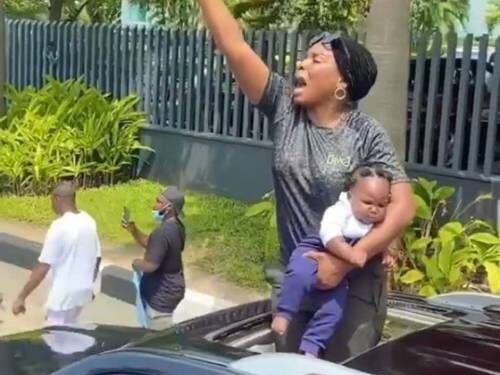 An #EndSARS protester with her baby

#EndSARS protesters have been gathering near the Central Bank of Nigeria (CBN), preparatory to continue their praceful protest.

They have imposed a public holiday for staff members of the nation’s apex bank.

Determined to see through their plan, they held on inside the down  pour and chanted solidarity songs against police brutality.

They called on others to join them on Monday, adding that they had food and drinks to distribute.

The new dimension came after the Senate President, Dr Ahmad Lawan; and Speaker Femi Gbajabiamila urged angry youths to sheathe their swords, because government was meeting their demands.

Both men spoke shortly after meeting President Muhammadu Buhari on Sunday at his official residence in Abuja.

The organisers of the protests made this known in an awareness image shared on social media.

The message on the image showed that the protestswould be organised at several locations on Sunday.

Another protest was organised by All BlackLivesMatter UK March against police brutality at the Nigeria High Commission – Scotland Yard – Parliament Square – between 2pm and 6pm.

Like it was done across several locations in Nigeria, a candlelight procession would also be held for victims of SARS brutality at Trafalgar Square, Charing Cross by 7pm.

Some Nigerians in Newark, New Jersey also held a protest on Sunday.

Many Nigerians and sympathisers are also expected to converge on Old Market Square in Nottingham to protest against police brutality in Nigeria by 3 pm.

#EndSARS protest was reignited following the shooting of a youth reportedly in front of a hotel in Ughelli, Delta State, in broad daylight by some FSARS operatives who drove away his Lexus Jeep. The police said the youth didn’t die.

Nigerians claimed that the police authorities had not shown enough commitment to reform the dreaded police unit over the years and called for its disbandment.

Despite the Force’s call for calm, the protest raged  in several parts of the country, including Lagos, Abuja, Osun, Oyo, Delta, Imo, with Nigerians abroad joining the demonstration.

▪︎ Additional reports by The Punch/EverydayNg