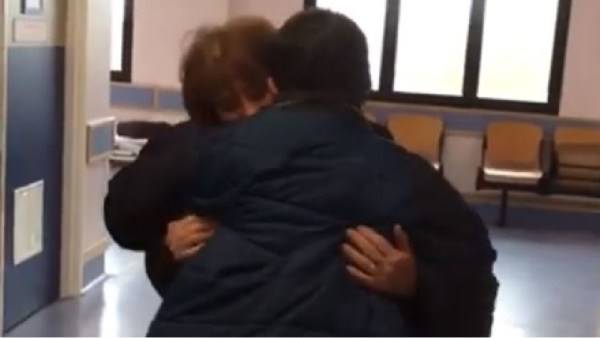 A man who was given 24 hours to live after contracting coronavirus has left hospital after unexpectedly beating the illness – and the emotional moment he was reunited with his mum has been caught on camera.

Ben McCafferty, 34, was discharged from Bradford Royal Infirmary in West Yorkshire, United Kingdom on Saturday, where he had spent more than two weeks battling COVID-19.

Speaking to nurses before leaving the hospital, Ben’s step-father Neil, who had stayed by his step-son’s side throughout the ordeal, said the family initially “didn’t expect him to survive”.

“We were told the survival rate was going to be very low. But with the staff and the help and the support that he has had, he has come through.”

In fact, Ben was – at one point – not expected to survive another 24 hours and was being looked after in palliative care, according to Karen Dawber, head of nursing at Bradford Teaching Hospitals.

“We just made him comfortable on a camp bed with his step-dad,” she told the Yorkshire Evening Post, adding: “We saw him start to get better. He was being looked after on our end-of-life ward.”

And – following a fortnight of treatment, Ben appeared to have beaten all odds and was able to leave the hospital virus-free.

As he walked through the corridors on Saturday saying goodbye to the nurses who had treated him, the 34-year-old was greeted by his mum Di Margerison, who hadn’t seen him for weeks.

In footage of the emotional moment, Ben is heard saying: “That’s Diane, that’s Diane,” as he spots his mother waiting for him, before the pair embrace.

“A handsome man,” Ben quips, amid laughter from the staff.

Ben had suffered meningitis at the age of 13 and was left partially paralysed. He was on a life support machine for three weeks in Leeds then.

Parents Neil and Diane Margieson, who live in Thornton, near Bradford, told Sky News he loves music, playing the ukelele and dancing along with an active social life.

On having him back home, she said: “He is the glue in the family… on a morning when you go in it’s just like sunshine when he smiles… and I’ve got that back.”

Ms Margerison had stayed with her son on the first night of his hospital admission, but was unable to continue due to restrictions imposed in the lockdown.

Ben’s stepfather Neil was by his bedside for the last two weeks.

He said: “I didn’t get much sleep but my first reaction (after waking up) was ‘was he dead?’

“I was told by one of the doctors he had one in ten chance of survival it really didn’t look good. You fear the worst.

“We are just overwhelmed that he is home safe and so incredibly grateful for all the hospital staff from the consultants to the cleaners.”

:: Listen to the All Out Politics podcast on Apple Podcasts, Google Podcasts, Spotify, Spreaker

Meanwhile, Ms Dawber said Ben had made a big impression with the nurses and was “very popular” during his stay.

She added that she was just “glad he has made such an amazing recovery”.

Urging the public to continue observing stay-at-home measures, she also reminded people to not be frightened to check into hospital if they are showing symptoms of COVID-19.

“Don’t be frightened to admit yourself to hospital if you are unwell,” she said, adding: “People can still recover. Ben proves that.”

Senate mandates MDAs on 100% remittance of IGR to Federation Account