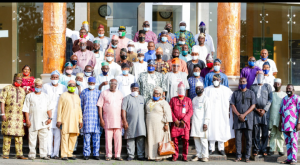 Governor Nasir El-Rufai of Kaduna State has hailed the peace initiative spearhead by community leaders in Zangon Kataf Local Government Area and pledged government support to ensure lasting peace in the area.
The governor gave the commendation on Tuesday in Kaduna when a delegation from the area led by the Agwatyap, Chief  Dominic  Yahaya, formally updated him on the peace summit, which was held on Saturday.
The News Agency of Nigeria (NAN) reports that the peace summit involved the Atyap, Hausa and Fulani communities in the area, who signed a 14-point agreement for peaceful co-existence in the area.

“We are particularly grateful to His Highness, the Agwatyap for his leadership in bringing together the diverse communities in his chiefdom to begin the process of rebuilding trust and restoring peace.

“We thank the community leaders and civic-minded individuals that have helped kickstart this dialogue process.

“All who seek to replace violent strife with harmony can be assured of the unstinting support of the state government for the peace and concord in all our communities.”

The governor reiterated that “the ultimate guarantee of peace is the willingness of communities to live in peace and harmony, and their resolve to settle all differences by strictly lawful means.”

He stressed that community support was as important as the deployment of security to the area.

“What the communities and leadership of Atyap Chiefdom have started is the type of grassroots ownership of the responsibility for peace and harmony in communities that the government has advocated as a critical factor beyond the deployment of police and military forces.

“This strong community rapprochement will help to complement security efforts to restore law and order and advance towards sustainable peace.

“We welcome the unequivocal repudiation of the violence and killings that have occurred in the Atyap Chiefdom, and the call on all residents of the area to report to the security agencies the criminals that have perpetrated the lawless acts in the area.

“This call for accountability is significant, and it represents a positive effort to contain impunity and deter crime,” he stressed.

El-Rufai assured the delegation that government would
enhance security deployments in the area as the peace process advances.

“The Kaduna State Peace Commission will also strongly support this effort at building peace at the grassroots.”

He appealed to all the communities to abide by the resolutions with vigilance and commitment, and work towards making it a sustainable accord.

“The work of peace is often hard, but it is a human obligation to work always to preserve human life, liberty and livelihoods,” he noted.

“I call on every person of goodwill to support the Atyap Chiefdom’s strong efforts to bring its communities together and stop the bloodshed and destruction of property.

“Everyone should reject the temptation to take laws into their hands and instead submit all grievances to the lawful authorities,” the governor said.

Earlier, the traditional ruler thanked the governor for his support to the successful hosting of the summit.
Agwatyap revealed that when he approached the governor about the proposal four weeks ago, El-Rufai welcomed the idea and suggested some names of stakeholders that the Agwatyap should involve in the  summit.
Yahaya said that the resolutions of the summit was  captured in a 14-point agreement, which the representatives of the Atyap, Hausa and Fulani communities signed.
NAN
Please follow and like us:

Gov Yahaya Bello, in self adulation, claims he averted another civil war in Nigeria

Nigeria At 60: The Colonialists Never Left – They Are Nigerian...

COVID 19: We will release policy on face masks this week-...