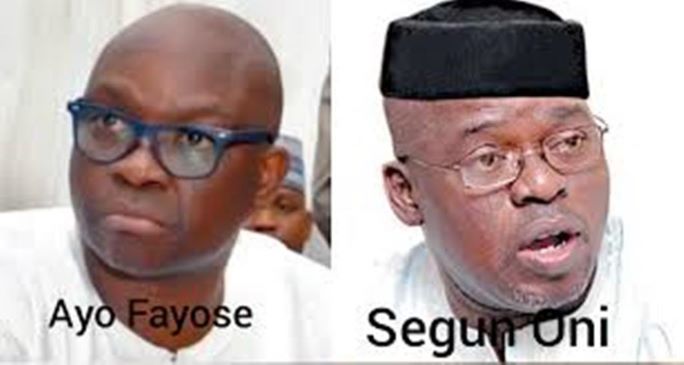 The Peoples Democratic Party (PDP) Caretaker Committee in Ekiti State has called on a former Minister of Works, Senator Adedayo Adeyeye, and others who left the party in the state to return.
The caretaker panel said it was delighted to receive back into its fold former governor Segun Oni and his cult-like loyalists, describing the development as an incalculable boost to the party and a celebrated achievement to the members of the caretaker body.
Adeyeye dumped PDP and joined APC on the eve of the July 2018 gubernatorial election in the state to team up with its candidate, Dr Kayode Fayemi, after he lost the party’s ticket to Prof. Kolapo Olusola.
Addressing newsmen on Monday in Ado-Ekiti, the Chairman of the Committee, Senator Hosea Agboola and the Secretary, Diran Odeyemi, cautioned party members against any antics aimed at undermining efforts made towards ensuring genuine reconciliation of tendencies in the state chapter.
Agboola, a former Federal Lawmaker representing Oyo North, dispelled the insinuation that the caretaker committee was favouring a tendency in the party, particularly a faction loyal to former Governor Ayodele Fayose.
He added that every member of the party was recognised in the PDP and that those who had the intention of rejoining the party were free to do so without encumbrances.
According to him, “The fact that former Governor Segun Oni has just rejoined the PDP is the greatest achievement of this committee
“We are going to reach out to former Minister of Works, Dayo Adeyeye and others who left before the July 14, 2018 governorship election and bring them back to the party.
“We will never be partial, because our mandate and terms of reference is to bring the all factions within the party together. We are to bring those who are aggrieved together to be one family, so that we can return to how we were in 2002 when former Governor Fayose was contested and won election in Ekiti. We are here to bring the family together and make everybody be on the same page.”
On the steps taken so far to reconcile Fayose and Senator Biodun Olujimi, who have been embroiled in a supremacy battle, Agboola said the trouble-shooting mission was yielding good results, exuding confidence the duo would soon resolve their political differences.
“This committee was set up without bias. We have visited Governor Fayose, Senators Olujimi and Duro Faseyi and what all of them were pushing for are peace and unity, nothing more.
“We were surprised about what Senator Olujimi said. She said she won’t allow the ruling party to continually harass Fayose and abuse him of corruption. If she had hated him that much, would she have said that?”
On the legal action instituted against the party concerning the contentious ward executive, Agboola added: “we are reaching out to those who instituted the court action on how to bring them together and resolve the issue.”
He said the position of the NWC would soon be communicated to the party about the ward congress, saying: “we are going to conduct future elections under the atmosphere of peace. We are not anticipating any problem.
“The party belongs to all the party members, not anyone from ward to the national level. Whoever wants to come is welcome. PDP is a brand. It remains the only party where you can contest without belonging to any clique or godfather.”
Please follow and like us:

“DANGOTE Vs BUA: BORROWING FROM GANDUJE’S INITIATIVE”, By Martins Oloja