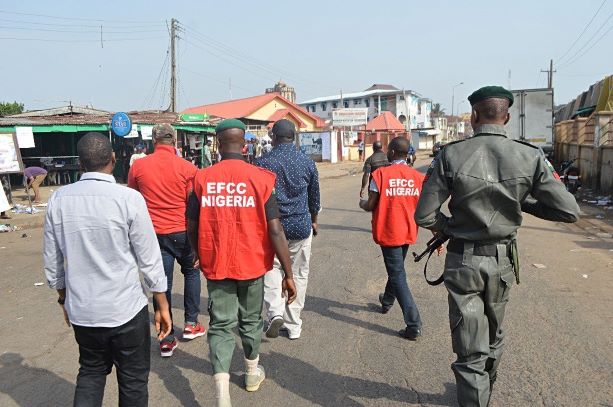 The Economic and Financial Crimes Commission (EFCC) has arraigned a lawyer on charges of misappropriation of N107million meant for about 100 clients, according to a statement by the commission issued on Tuesday.

Gideon Ngwen, charged with three counts including criminal breach of trust and misappropriation, allegedly converted to personal use the judgment debt paid into his account on behalf of the clients.

Mr Ngwen was said to have served as a lawyer to the about 100 workers pro bono (free of charge) in prosecuting two suits they filed at the National Industrial Court, Jos Division, against the Plateau State Government to challenge the unlawful termination of their employment.

According to EFCC, the workers alleged that to their dismay, they discovered that the sum of N107million, which had been paid into the defendant’s United Bank for Africa Bank account, had been converted by him for personal use.

Count one of the charges against the lawyer reads: “That you, Gideon Ngwen (trading under the name and style of Gideon Ngwen & Co.) between 21st September, 2017 and 8th July, 2018 at Jos, Plateau State within the Jurisdiction of this Honourable Court, converted to your own use the sum of N67, 540, 129. 57 (Sixty Seven Million, Five Hundred and Forty Thousand, One Hundred and Twenty Nine Naira, Fifty Seven Kobo) which was entrusted to you by the Plateau State Government as payment of arrears of salaries to David Musa Ayiki and 99 other staff of Plateau State Radio Television Corporation (PRTVC).”

He pleaded not guilty to the charges.

In view of his plea, the prosecuting counsel, M. O. Tijani, asked for a date for trial to commence.

The defendant, who opted to stand for himself, did not object.

“I have no objection to the prosecution counsel applying for a trial date, I have application for bail before the court and I have also served the complainant,” he said.

The judge, C.L Dabup, granted the defendant bail with the condition that a member of the executive committee of the Nigerian Bar Association (NBA) must write a letter of undertaking to produce him in court anytime for trial.

The matter was adjourned till 3 November for hearing.

We will ensure effective implementation of revised National Policy on Food...

My faith in young generation is unshakable, says Aisha Buhari

Kano- Maradi Railway: Before we Politicize Infrastructure, By Olawale Rasheed

FG to Construct Museum in Oba’s Palace for Repatriated Artefacts