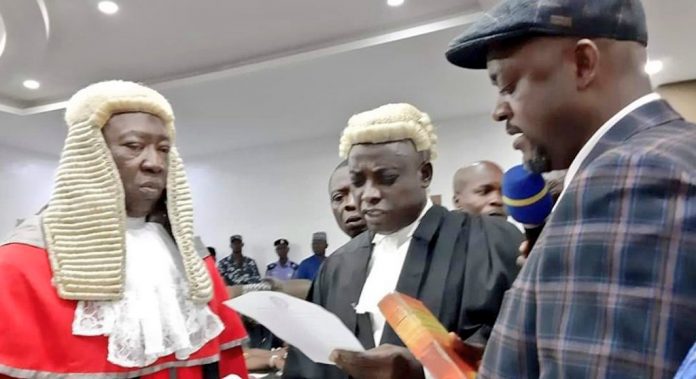 Onoja being worn in

Mr Edward Onoja has been sworn in as the Deputy Governor of Kogi State.  The swearing-in ceremony held on Monday at the Government House in Lokoja, the state capital.

Onoja, a former Chief of Staff to Governor Yahaya Bello, was inaugurated shortly after he appeared before members of the Kogi State House of Assembly.

But in a riposte, the  Peoples Democratic Party (PDP) dismissed the inauguration of a shadow deputy governor in Kogi state as a complete nullity, which had no place under our laws.

A statement by the National Publicity Secretary of the PDP, Kola Ologbondiyan, described the swearing in as “scandalous to our judicial system, that the Chief Judge of Kogi state, Justice Nasir Ajana, whose panel acquitted the state deputy governor, Elder Simon Achuba, of any misconduct, suddenly flipped to conform with an odious plot by desperate Governor Yahaya Bello to forcefully remove the deputy governor.
“The action of the Kogi Chief Judge has heavily jeopardized the integrity of the judiciary and capable of bringing the institution to public disrepute if not immediately checked.
“Our party insists that the Chief Judge of Kogi state, in staging an illegal inauguration of Edward Onoja, as a deputy governor, while the office has not become constitutionally vacant, amounts to gross misconduct, which cannot be accommodated under our laws.
“The PDP alerts that this is a clear demonstration of the reprehensible and sacrilegious design by Governor Yahaya Bello to entangle, drag down and corrupt the institution of the judiciary, cause a constitutional crisis, trigger mayhem and derail the smooth conduct of the November 16
governorship election in the state.
“This is because there is no way there can be two deputy governors in the same state, more so as the people of Kogi state had already registered their anger and resentment against this illegality in the public space.
“The party therefore calls on the Chief Justice of Nigeria (CJN), Justice Mohammed Tanko, to take immediate steps to save Kogi State from a plunge into anarchy and chaos.
“Nigeria is a nation governed by law and nobody must be allowed to set aside our constitution and corrupt our democratic order for his or her selfish and repressive agenda.”
Please follow and like us:

Aregbedola claims over N1 trillion assets saved in 2020 by Federal...

IGP orders investigations into alleged extortion of N22 million worth of...