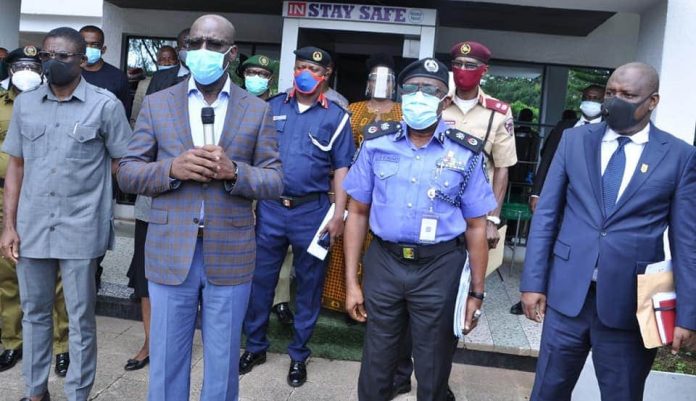 As part of preparations for the September 19, 2020 gubernatorial election in Edo State, the state governor, Mr. Godwin Obaseki, has expressed readiness of his administration to collaborate with relevant security agencies in mopping up light arms.

The governor said this after presiding over the State Security Council meeting held at the Government House, Benin City.

According to Obaseki, the council deliberated on several issues including the spread of coronavirus (COVID-19), data of crime incidents in the state and concerns over the build-up of arms, noting, “On COVID-19, we looked at how to increase compliance to COVID-19 rules particularly in the light of electioneering that has commenced.”

He explained that the review of COVID-19 data showed that community spread of the virus is at an all time high, of about 80 per cent, as the state continues to record increasing cases.

Obaseki said, “With the level of spread as we are approaching electioneering, we decided to take measures by increasing risk communication, letting the people know the risks associated with not complying to COVID-19 rules.

“We looked at the data of crime incidents in the state and noticed the increase in kidnapping cases and homicide resulting from cult activities.

“We also looked at the security environment and noticed related arms build-up ahead of the September 19 governorship election in the state.”

The Edo State Commissioner of Police, Johnson Kokumo, said the police were concerned about the arms build-up as it was putting machinery in place to ensure a mop-up.

He noted that the mop-up w,ould be done before, during and after the September 19 governorship election in the state.

Kokumo added that some disgruntled elements had been arrested in the state with arms and ammunition as investigation was ongoing to ensure they were prosecuted.

The police commissioner assured Edo people  that the Police Command would ensure that individuals and groups defacing campaign billboards and posters across the state were arrested and prosecuted.

Olumilua fought for enlistment of Ondo as oil-producing state- Fayemi