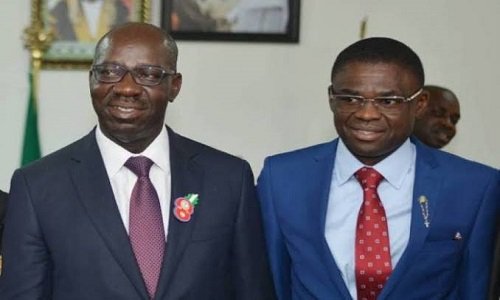 The Edo State Chapter of the Peoples Democratic Party (PDP) on Thursday stated that Governor Godwin Obaseki’s achievements in the last four years would be their selling points during campaigns ahead of the September 19, 2020 governorship election.

The Chairman of the party’s Campaign Council, Chief Dan Orbih, stated this during a stakeholder’s session held at the Government House in Benin City.

Orbih said the statewide campaigns would  start on Monday, August 3.

He said the Peoples Democratic Partywould not be intimidated in the Edo governorship election, even with the opposition having the backing of the Federal Government and “the unleashing of its lion and tigers.”

Speaking after the stakeholder’s session, the Chairman of the PDP Governors Forum, Governor Aminu Tambuwal, alleged that the Federal Government in many previous elections deployed federal agencies in its Favour.

The party governorship candidate, Governor Godwin Obaseki, said all perpetrators of political violence in the state would be caught and dealt with.

Aregbesola says protection of life and property should not be handled...