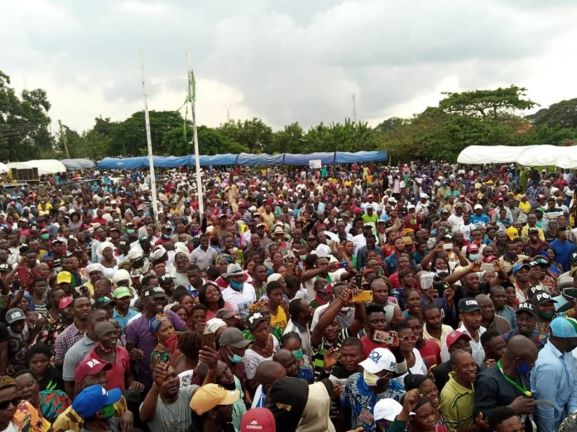 Pastor Osagie Ize-Iyamu, the All Progressives Congress (APC) Governorship candidate in the Edo 2020 election, has promised to provide infrastructure development in Esanland located in Edo Central Senatorial District of the state.

He gave the assurance during his political campaign at Igueben, Igueben Local Government Council of the state on Monday.

Ize-Iyamu said that the only functional state investment in Esanland was the Ambrose Alli University (AAU), which he alleged was being underfunded by the present administration.

“The only state investment in Esanland is AAU. The institution used to get about N250 million as state government subvention when Adams Oshiomhole was governor of the state.

“This present administration has reduced the subvention to N96 million which can barely pay staff salaries,” he said.

He also promised to tackle the incessant security challenges in Esanland via adequate funding and partnership with traditional rulers and local vigilantes.

“Traditional rulers must be involved in governance and their suggestions must be taken seriously.

“We have a SIMPLE agenda that can provide solutions to security challenges in our state,” Ize-Iyamu said.

He added that if voted as governor, he would promote the Esan Agenda as well as put Esan people in the mainstream of Edo politics.

Ize-Iyamu earlier visited the Palace of the Onojie of Igueben where he gave an assurance to support the supremacy of the traditional institution if voted as governor.

“When I become governor, I will give due respect to traditional institutions; I don’t think the present administration has accorded the traditional rulers due honour,” he said.

In his remark, The Onojie of Igueben, His Royal Highness, Ehizogie Eluojierior, prayed for the APC candidate to have a peaceful campaign.

Kebbi Disaster and the Hippopotamus By Olusegun Adeniyi