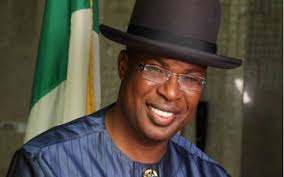 A former deputy governor of Bayelsa State and aspirant for the All Progressives Congress (APC) of Bayelsa West Senatorial seat, Hon. Peremobowei Ebebi has won the primary election.

In the same vein, Hon. Abel Ebifemowei, an aspirant for the Bayelsa Central Senatorial seat emerged victorious in the primary election and had been been declared as candidate in the forthcoming election.

Announcing the results at the APC party seretariat in Yenagoa, the chairman of the APC Bayelsa Central and West Senatorial Primary Elections, Gen. Abdulsalam Dahiru (retd.) said the in the West Senatorial District three (3) aspirants contested with Hon. Peremobowei Ebebi polling a total of 10,450 votes to emerge winner.

He stated that in the Central Senatorial Primary election, five (5) aspirants contested with Hon. Abel Ebifemowei who garnered a total of 24, 450 votes to be declared winner.

In their various acceptance speeches, Hon. Ebebi and Hon. Ebifemowei thanked party faithful for coming out en-mass by voting them to fly the party’s flag in the October 31 Senatorial eletions.

They expressed thier profound thanks to the leader of the party in the state, Chief Timipre Sylva, and other leaders for ensuring that the primaries were conducted peacefully, assuring that they would leave no stone unturned to “ensure the party wins convincingly during the bye-election.”

Osinbajo heads for Ghana to represent Buhari at ECOWAS summi

Meet Kelechi Ndukwe, the first Nigerian to take Command of a...

Why we have strict travel protocols in Nigeria- FG