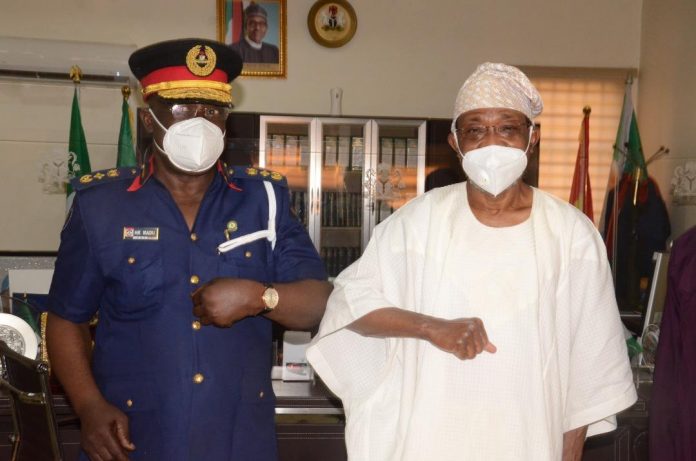 Commissioner in charge of Appointment and Promotion at the Civil Defence, Corrections, Fire and Immigrations Board (CDCFIB), Alhaji Ado Ja’afaru on Thursday presented DCG Hillary Madu, to the Minister of Interior, Ogbeni Rauf Aregbesola as the Acting Commandant General of the Nigeria Security and Civil Defence Corps (NSCDC).

Ja’afaru is also the Chairman of an Adhoc Committee setup to screen and recommend suitable candidates for the vacant positions according to extant laws.

Ja’afaru said the presentation of his committee’s report to the Minister, who is also the Chairman of the board, directed the outgoing CGs of the two services under consideration to handover to the most senior officer in their respective service.

Speaking during the meeting, Minister of Interior, Ogbeni Rauf Aregbesola informed the Acting CG Madu that he has made recommendations to President Muhammadu Buhari based on the recommendations of the ad-hoc committee on the most suitable candidate to replace the outgone CG.

He charged the acting CG to “identify low hanging fruits in your interim stay at the helms of affairs of your service. Take actions that will boost the morale of your men. I want to work with you to reshape your Corps so as to make it a reliable and robust assistant to the Nigeria Police.

The minister also reminded him of the central role of the NSCDC in agro-protection, saying: “Albeit, you are a main and front-liner in agro-security provision, so you must be conscious of that fact.”

“You have to protect our farming communities and farmers, be it small, medium or largescale farmers to guarantee food security for the country” Aregbesola informed the Acting CG.

The presentation of the Acting CG to the Minister followed the submission of the report by the adhoc committee on the screening and selection on substantive CG for the Nigeria Correctional Service (NCoS) and NSCDC which was earlier presented to the Minister.

While outgone CG of the NSCDC handed over to DCG Hillary Madu, CG of the NCoS who had his passing out parade on Thursday, handed over the baton of leadership of the service to DCG John Mrabure.

Minister of Information, Alhaji Lai Mohammed; Board Commissioner in charge of Discipline and General Purpose, Major General Emmanuel Bassey (Retired); and Board Secretary, Alhaji Alhassan Yakmut were present at the meeting.