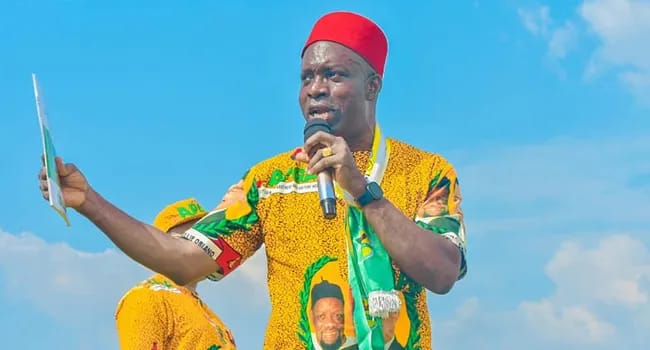 Mr Ikechukwu Tabansi, a chieftain of the All Progressives Grand Alliance in Anambra State, has advised residents not to expect so much from Professor Charles Soludo’s first year in office as governor.

Soludo, a former Governor of the Central Bank of Nigeria (CBN), won the November 6, 2021 governorship election in the state and will be sworn in on March 17.

Tabansi told journalists in his Nri county home in Anaocha Local Government Area on Monday that the present economic downturn in the country might adversely affect Soludo’s programmes and policies.

He said that the poor state of roads in the state and other compelling needs might slow down the speed of the next government.

He said: “In spite building an airport, it was wrong for the present administration to neglect other sectors, especially the roads.

“In addition to fixing the roads, the payment of workers’ salaries, among other compelling needs, will be waiting for him.

“Some people might think that these problems would be solved within his one year in office.

“I don’t expect much because the nation is experiencing economic downturn.

“But with the support of the people, in the long run, he is going to do so much for the state.”

Tabasi said that as CBN governor, Soludo’s achievements were outstanding, adding, “if given the necessary support, he will replicate that feat in the state.

He urged Soludo to explore all revenue windows to ensure that he acquitted himself in the delivery of democracy dividend to the people.

“When I was in charge of public motor parks in Onitsha, I was generating over N97 million monthly.

“I believe that many other sectors can also bring money into government coffers, so his administration must explore these windows,” Tabansi said.(NAN)

Aghughu Adolphus is Nigeria’s new Auditor General of the Federation