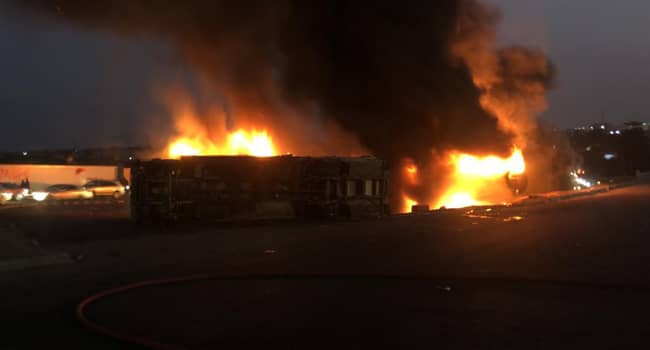 A tanker conveying petroleum products has exploded near Otedola Estate on the outbound service lane of the Lagos-Ibadan Expressway.

A video on social media showed thick, dark flames leaping into the air, clouding the evening sky as vehicles continued to move on other lanes of the Expressway.

The Otedola section of the Expressway has been noted for similar accidents.

In October, a tanker loaded with petrol exploded on Otedola Bridge.

According to the Lagos State Emergency Management Agency, no injuries were recorded in the incident but the extent of property damaged is still being determined.

“The Agency has responded . . . and upon arrival of the Agency’s officials at the incident scene, it was observed that a tanker conveying an unknown amount of diesel fell spilling its content which resulted to an explosion that affected a truck conveying goods,” a statement signed by LASEMA chief, Olufemi Oke-Osanyintolu, said.

The statement added that rescue and recovery operations were ongoing. (Channels TV)